Apparently the term “Maundy Thursday” comes from the Latin phrase “mandatum novum” meaning “new commandment.” The reference is to John 13, which features the story of Jesus washing the disciples’ feet, followed by his statement about a new commandment he has given them, to love one another.

We actually reached this passage in my class on the Gospel of John yesterday, and had an interesting discussion about whether this commandment is “new,” and if so, in what sense.

1 John seems to be aware of the issue, indicating that the new commandment isn’t new. But perhaps the newness relates to the way Jesus made love a priority, allowing for commandments to be prioritized and even in some instances neutralized in relation to the commandments defined as the greatest.

We also talked about the footwashing. Brian LePort shared some great icons depicting the discomfort of Peter and the other disciples with Jesus’ action. This is my favorite: 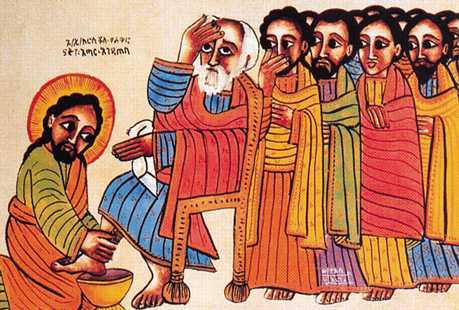 What do readers make of the core element of the story – that Jesus washed his disciples’ feet – considered from the standpoint of history?

It would be easy to dismiss it. It is only recorded in the Gospel of John, after all. But that is not the only relevant consideration. It fits so well with what we find recorded in the other Gospels – indeed, it sounds more in keeping with the Synoptic Jesus than John’s! Moreover, anyone who has lived in a society with an honor/shame values system will understand just how shocking an action like this would be. (Can you imagine a Romanian pastor cleaning a toilet?) It seems more likely that a controversial action like this one would be omitted by early Christian authors, than that it would have been invented.

What do others think about its historicity or otherwise?

March 28, 2013 Jesus Wore a Red Shirt
Recent Comments
18 Comments | Leave a Comment
"Under the old covenant (ten commandments), people were (and still are) racists and sexists. For ..."
Herrnhut Was Jesus a Racist?
"Reconciliation is a two-way street, restoring a broken relationship between two people. God does indeed ..."
Iain Lovejoy Forgive Us Our Debts, Not Repay ..."
"Excellent. God is not, and does not want to be, an accountant; keeping a ledger ..."
Harvey James Johnson Forgive Us Our Debts, Not Repay ..."
"Don't confuse forgiveness with reconciliation. Jesus tells us to forgive people who sin against us, ..."
Derek Thompson Forgive Us Our Debts, Not Repay ..."
Browse Our Archives
get the latest updates from
Religion Prof: The Blog of James F. McGrath
and the Patheos
Progressive Christian
Channel
POPULAR AT PATHEOS Progressive Christian
1