Shmi Skywalker the Mother of Batman

I apologize for the wacky title, but if a movie is made which features August Pernilla as Mary and Christian Bale as Jesus, then one simply has to make some sort of reference to their other roles along the lines of the title to this post, and get it out of one’s system. Or perhaps we should actually discuss science fiction and superhero saviors in connection with the movie, if there is interest.

The movie I am referring to is the 1999 TV movie Mary, Mother of Jesus

. I watched it as part of my research for an article on the kinship of Jesus as depicted in film, which I’m working on for a reference volume. The movie actually does more with the relatives of Jesus than many films I’ve seen about the life of Jesus, having the wedding at Cana explicitly said to be that of a cousin, and featuring James the brother of Jesus. The reaction of James and Mary to Jesus’ remark about who his mother and brothers are, and the conversation between them about it, is very interesting. 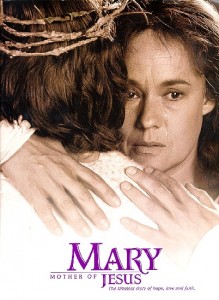 The movie makes Mary explicitly responsible for more of the shape and content of Jesus’ adult life than any other treatment of this subject I have encountered. There is a hint of what is to come at the very beginning of the movie, as  Mary finds a lost sheep. There is confusion in the film about the relationship between Roman and Herodian rule, which reflects the confusion of many readers of the Gospels. Be that as it may, Mary shows courage towards the Romans, and views a Roman as just another human being, with different clothing, and that some of them may be good. Mary prays about the suffering her people face, and her asking for God to act becomes the precursor for God choosing to use her in his plan. Mary intervenes in the stoning of a woman caught in adultery (and will later be at risk of such a treatment herself). The story about the good Samaritan is a bedtime story that Mary tells the young Jesus. And when Joseph dies, he says to Mary, referring to Jesus, “Everything he is, you made him.”

Jesus in the movie is depicted as a fully human figure, who has been empowered to accomplish amazing things but who must still find his way and figure out what to do. Elizabeth, when her son is killed, foresees that they will do the same to Mary’s. At the foot of the cross, Mary prays the Lord’s Prayer, and later she will berate the disciples for their cowardice, lead them in prayer, and explain to them that their work is not over, in a manner that echoes the great commission.

While there is much that is historically problematic, and much which may seem plausible to an American viewer that will seem implausible to someone from a culture closer to that in which the historical events that inspired the story unfolded, there is a lot that is really interesting and creative. If there are readers of this blog who have seen the movie, what did you make of it? And even if you haven’t, what do you think the role of Jesus’ family was both during his public activity, and in shaping the direction of the movement centered on him after the crucifixion?

March 8, 2013 Who's In Whose Image?
Recent Comments
2 Comments | Leave a Comment
Browse Our Archives
get the latest from
Religion Prof: The Blog of James F. McGrath
Sign up for our newsletter
POPULAR AT PATHEOS Progressive Christian
1