The latest episode of Doctor Who, “Hide,” illustrates the classic tension in the show between offering scientific explanations for the seemingly supernatural, and positing the reality of the paranormal. Spoilers ahead.

The episode presents itself as a ghost story. It has a haunted house, an apparition, and the Doctor and Clara turning up and presenting themselves as “ghostbusters.” There are quite a number of humorous points, including when Alec Palmer responds to the Doctor’s introduction of himself as “the Doctor” by asking “Doctor what?” to which the Doctor replies, “If you like.”

On the one hand, the spooky apparition turns out to be a time traveler stuck in a bubble universe, moving at a different speed than our universe so that the glimpses people get of her are all from a single moment.

On the other hand, it is a psychic empath (Emma Grayling) who makes the connection with the lost time traveler, Hila Tacorian. And so, as ever, Doctor Who seems both to scientifically debunk a claim to the supernatural, and embrace the supernatural as possible within the universe it envisages.

It is a clever idea to have the Doctor travel from the beginning of Earth to the end, in order to take pictures that will allow him to get a better picture (literally and metaphorically) of what is going on. That also allows the question to be raised of how the Doctor can be OK with simply seeing the entire history of a planet in that way. Here is the relevant bit of dialogue.

“We’re all ghosts to you – we must be nothing”

“You’re the only mystery worth solving”

The interaction between Clara and the TARDIS is also a lot of fun.

The episode also hints at why the show is enjoyable even when it doesn’t make rational sense. The episode turns out to be not a ghost story, but a love story, as the Doctor observes. Like LOST, it is the emotional connections, and not the explanations, that are supposed to be satisfying. 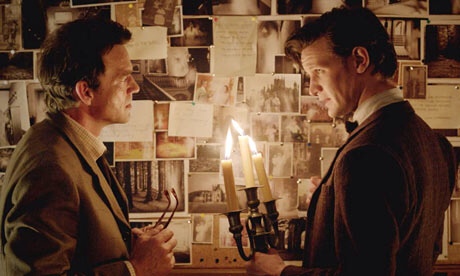 There are connections with the season’s story arc. The Doctor went there not primarily to rescue a lost time traveler, but to consult an empath about Clara. Emma tells him that she is a “perfectly ordinary” girl. But she did earlier warn Clara not to trust the Doctor, since he has a sliver of ice in his heart.

There are elements that intersect with religion, inasmuch as the “ghost” – whether a supernatural “witch of the well” or a scientifically-explicable distant descendant and would-be time traveler – is being helped to “find her way home” as a “lost soul.” The focus on love, empathy, and other connections which have a real impact on the universe (and others!) in ways that are not obviously explicable in scientific terms is something that can also be related to religion.

What did you make of “Hide”? And why do you think it was called that?

Progressive Christian
Provocative Parables at the Intersection of the Secular...
Religion Prof: The Blog of James F. McGrath