In the Biblical Sense

As someone who teaches Bible, this cartoon Hemant Mehta recently shared made me laugh: 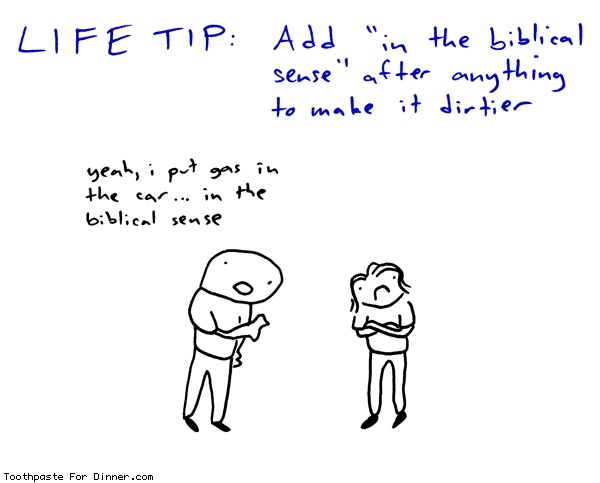 It is funny that, through a series of twists and turns in the history of language, a reference to something being “Biblical” can turn it into sexual innuendo. This actually illustrates an important point about how languages work, a point often missed by some who read, interpret, and use the Bible. The term “Biblical” might have a particular dictionary definition, but its nuances, and the connotations it gives to a sentence, could vary, even when the phrases are very similar. Think for instance of a sermon in which the preacher said that “The Biblical sense of 'faith' includes trust and faithfulness,” and then if the cartoon above had said “I had faith in her…in the Biblical sense.” Someone in the distant future interpreting the two would have to be intimately acquainted with the language and culture to get the difference between the two. You might say that they would have to know the English language and culture of the 21st century in the Biblical sense in order to get the joke.

The very notion that there is one “Biblical sense” of a word is itself indicative of widespread popular misperceptions about how languages work – or at least, how Biblical languages work, since few make this mistake with respect to their own native language. The sense of the word “know” in the Bible – the word whose appearance in the phrase “know in the Biblical sense” is in the background to the cartoon – varies in relation to our possible renderings in English. It less often refers to sex than to knowing in ways closer to the normal English meaning of that word. And so one can say, somewhat ironically, that not all knowing in the Bible is knowing “in the Biblical sense.”

But this is just a Biblical scholar making an academic point about a cartoon which should perhaps not be overthought, but simply read and enjoyed…in the Biblical sense.

April 22, 2013
The Historical Jesus - Now With Even Less Futility!
Next Post

April 23, 2013 Young-Earth Creationists are Full of Hot Air When it Comes to the Flood
Recent Comments
2 Comments | Leave a Comment
Browse Our Archives
get the latest from
Religion Prof: The Blog of James F. McGrath
Sign up for our newsletter
POPULAR AT PATHEOS Progressive Christian
1