Ken Ham has posted a reaction on Facebook to an image I shared on my blog yesterday (you can read the comments from his cronies there). I’ll share the text of his Facebook post here and then discuss it:

Come on James McGrath, do you really think stooping to such lows befits a professor at an academic institution?

James McGrath is an Associate Professor in the Religion and Philosophy department at Butler University, Indiana. He has written a number of scathing blog posts against me and Answers in Genesis.

Yesterday he posted (actually reposted from someone else) my photo (see link) with some words that God would supposedly say to me.

I can think of many passages of Scripture to respond to this—but let me share two:

1. The Luke 16 passage about Abraham and Lazarus supposedly paraphrased by McGrath actually states this in verse 31: “But he said to him, “If they do not hear Moses and the prophets, neither will they be persuaded though one rise from the dead.’ ”

James McGrath will not listen to what Moses wrote in Genesis, as he rejects the clear words of Genesis concerning creation in six days, death after sin, global Flood etc—whereas I do believe this written revelation that is the Word of God!

2. “He who speaks truth declares righteousness, But a false witness, deceit.” (Proverbs 12:17)

3. “My brethren, let not many of you become teachers, knowing that we shall receive a stricter judgment (James 3:1)—and I suggest the rest of James 3 about the tongue should be read.

Here is a link to a previous blog I wrote about James McGrath:http://blogs.answersingenesis.org/blogs/ken-ham/2013/03/12/intolerant-academic/

I think the ministry of AiG is getting to James McGrath!!

Here’s what I think is most telling:

The first substantive statement he makes is to pick up on my allusion to the parable of the rich man and Lazarus, and to write the following:

James McGrath will not listen to what Moses wrote in Genesis, as he rejects the clear words of Genesis concerning creation in six days, death after sin, global Flood etc—whereas I do believe this written revelation that is the Word of God!

First, ignoring the indications within the text about its genre and its use of parallelism, ignoring those details which you do not wish to take literally, and then proclaiming oneself to believe Genesis is appalling.

But that is not the worst part. The parable does not accuse the rich man of having failed to accept that God created the universe, in any particular time period. We can be fairly sure that the Jewish rich man believed those things. His failure to listen to Moses, of which Abraham accuses him in the parable, was a failure to show concern for the poor.

Even with my limited resources, I am ashamed that I have not done more to help the poor. Even on an educator’s salary in the United States, I am in the top 1% globally. (My pastor recently shared with me a link to the Global Rich List. You can click through, type in your annual income, and find out where you stand among human beings living today.) If I were Ken Ham, wasting enormous amounts of money promoting misinformation about the Bible and science, I hope I would not have the audacity to arrogantly proclaim myself to have “obeyed Moses” in the sense that the parable of the rich man and Lazarus talks about. 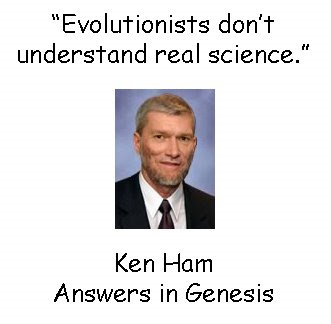 Ham then quotes a verse without discussion, then another about not rushing to be an educator. The irony is that I do what I do with fear and trembling. I emphasize to my students that my mind has changed as I’ve studied topics, and that they need to look at the evidence, listen to the experts, and draw their own conclusions. Ham does not seem to evidence either the pedagogical approach one expects from an educator, nor the normally career path or qualifications one expects an educator to have. And so his being regarded as a “teacher” seems to be purely a result of his own self-promotion. And yet he quotes James 3:1, without any hint of awareness of the irony, and without any indication that he actually fears being held accountable for what he does and thus considers it crucial to examine himself and take seriously the possibility that he might be wrong.

He is certainly correct that Answers in Genesis gets to me. Young-earth creationism got to me in a bad way in my teens when I foolishly accepted its claims without sufficient fact-checking. It gets to me now in a different way, causing me frustration and dismay as they promote lies in the name of Christianity and distract from the core message of the Christian faith. Ken Ham’s dedication of his life to promoting falsehood should “get to” anyone who loves the truth and is concerned that the Christian faith not be made to look like a religion simply for the dishonest and the gullible.

April 27, 2013 Talpiotpalooza
Recent Comments
58 Comments | Leave a Comment
"Derp now anyone who advocates a 2 state solution is a Zionist like Chomsky.Meanwhile Israel ..."
Bones Academics and the Israel-Palestine Conflict
"Thanks, James. I downloaded these."
Wayne Steury Keep Up Your Biblical Aramaic and/or ..."
"No. I think most Classicists accept that basic biographical information about Socrates can be affirmed ..."
VinnyJH Was Paul Uninterested in the Historical ..."
"Are you saying you think that no Classicists conclude that specific ideas or events can ..."
James F. McGrath Was Paul Uninterested in the Historical ..."
Browse Our Archives
get the latest from
Religion Prof: The Blog of James F. McGrath
Sign up for our newsletter
POPULAR AT PATHEOS Progressive Christian
1