Shamed By You Knowing Science?

Scott Bailey included this image in a recent post: 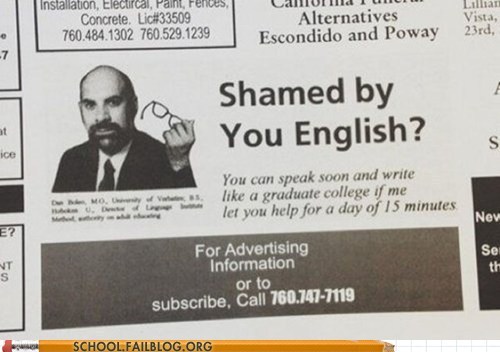 One thing that struck me about it is that, if you don’t actually know English, you might not realize just how unsuitable a teacher the person who placed the advertisement is.

Something similar is the case with science, and Biblical studies, and history, and many other subjects. There was another image circulating recently which quoted the question some people think is an objection to evolution, “If humans evolved from monkeys, then why are there still monkeys?” and then asked whether it is more likely that (1) all the scientists in the world are involved in a conspiracy, (2) it never occurred to any of them to notice that there are still monkeys, or (3) you weren’t paying enough attention in your high school science classes to realize that the question itself reflects a significant  degree of ignorance. The answer is obvious to most people.

If you were looking for a science tutor and knew the basics, you might know what to look for in a good tutor. But if you don’t know much if anything, you might fall for a young-earth creationist who, to the scientifically literate, sounds like the guy in the ad. But to you it might seem like he is simply a kind-hearted teacher offering you a great opportunity to learn.

The same applies to Biblical studies. There are plenty of people who have given credence to people and sources which, to an academic in my own field, sounds like the guy in the ad. That includes people across the spectrum, from conservative Christian inerrantists to mythicists who think that Jesus is just Horus with a makeover.

You need to know something in order to spot frauds and charlatans. If you don’t, then failing to proceed with caution may only result in your compounding your ignorance.

April 26, 2013 Practical Revelation
Recent Comments
20 Comments | Leave a Comment
Browse Our Archives
get the latest from
Religion Prof: The Blog of James F. McGrath
Sign up for our newsletter
POPULAR AT PATHEOS Progressive Christian
1