I presume that this sign is intentional and not a spelling error: 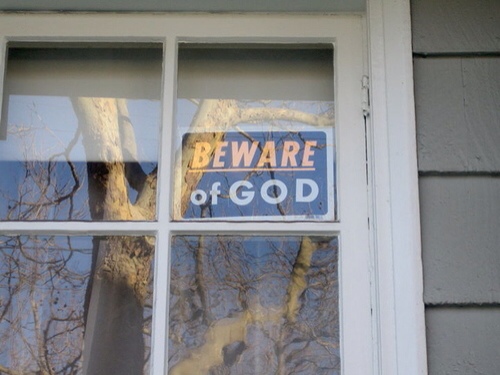 From This Isn't Happiness, HT Jeff Carter on Facebook

Gods were, and then later a single God was, thought to be capricious and terrifying in ancient times. The divine was thought to be, or later to be expressed through, what we today call forces of nature. Shaking ground, lightning bolts, tornados, all assumed to be expressions of divine wrath. People tried as they might to figure out what they could possibly have done to have incurred such wrath.

Today we know that earthquakes and storms do not single out sinners. They follow “laws” that do not result in entirely predictable occurrences, and so seemed to be like the caprices of persons, before we understood them as we now do.

In view of our modern understanding of the world, getting an attack god to protect one's home is not going to prevent break-ins, unless the would-be thieves are among those who fear God. But since fear of God ought to correlate with not stealing, it seems unlikely that there will be many deterred by the sign.

For some, the move away from anthropomorphizing the forces of nature is a move away from any sort of notion of the divine. But for others, it is a move towards a deeper appreciation of true transcendence, as we understand that the ultimate Reality that encompasses all we have come to see, detect, and comprehend is even greater and more different than us than most of our ancient predecessors envisaged.

May 1, 2013 It's Real
Recent Comments
16 Comments | Leave a Comment
Browse Our Archives
get the latest from
Religion Prof: The Blog of James F. McGrath
Sign up for our newsletter
POPULAR AT PATHEOS Progressive Christian
1