The episode “The Name of the Doctor” offered some interesting material for discussing notions of identity and immortality, life and death. 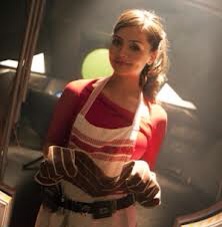 When the Great Intelligence is asked where he obtained certain information, he replies that he is “nothing but information.” A similar idea is present when Clara is planning to pursue the Great Intelligence along the Doctor's timeline, which will inevitably mean her identity's dispersal into millions of iterations, but none of which is still continuous with her. Clara responds with a reference to a saying of her mother's, that it is the recipe that makes the soufflé.

And so one can ask whether it is better to exist in one place as oneself, or to have one's information, one's pattern, preserved across infinity, or recorded from some timeless perspective (much as the Doctor's timeline continues to exist from such a perspective even within the tomb which indicates that timeline's end).

There is what I think is a wonderful treatment of a related topic, explored through Doctor Who, in the forthcoming volume which I edited together with Andy Crome, Time and Relative Dimensions in Faith. It looks at the unending existence of some entities, which seems to inevitably lead to tedium and boredom, versus the timeless preservation of a time lord's existence in the matrix on Gallifrey, which is eternal objective existence rather than ongoing endless subjective existence. I highly recommend the chapter on that topic, for anyone interested in exploring it further!

May 20, 2013 Kept Apart by Theology
Recent Comments
14 Comments | Leave a Comment
"huh. I thought it was a complete mess, myself. It equivocates constantly between ordinary, humdrum ..."
arcseconds We All Believe
"I don´t know that I held you to a stony pigeonhole. I cited public interest ..."
greenpeaceRdale1844coop Renovate Your Faith
"This worked for me also. removed the rear panel, unpluged the button panel connector and ..."
Troy Huhmann Solving the Annoying Flashing Input Menu ..."
"This worked for me, thank you!! Keeps my steadfast 15+ year old Dynex LCD running. ..."
Ri Dav Solving the Annoying Flashing Input Menu ..."
Browse Our Archives
Follow Us!