DOMA and Prop 8 Struck Down

In a 5-4 decision, the United States Supreme Court has struck down the Defense of Marriage Act!

Read the text of the decision here. A key quote from towards the end:

The federal statute is invalid, for no legitimate purpose overcomes the purpose and effect to disparage and to injure those whom the State, by its marriage laws, sought to protect in personhood and dignity.By seeking to displace this protection and treating those persons as living in marriages less respected than others,the federal statute is in violation of the Fifth Amendment.

UPDATE: It seems that the Supreme Court has also decided that, as my friend Charles Allen put it on Facebook, “defenders of proposition eight have no standing to bring suit to the Supreme Court. That means that Proposition 8 remains struck down. Marriage equality returns to California!” 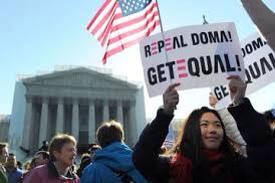 June 26, 2013
Equality Profile Picture of the Day
Next Post