David Hayward’s cartoon which he posted today depicts what “faith” is for many people: 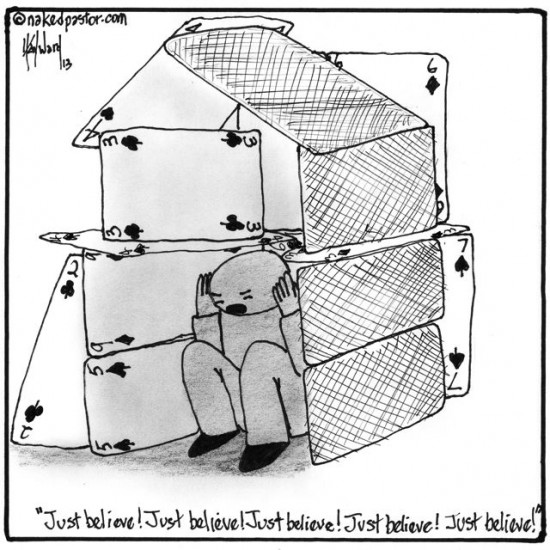 Hundreds of years ago, faith meant a response of trust and faithfulness to a God whose existence was thought to scarcely be in serious doubt. The order of the cosmos, the power of storms, and many other aspects of life seemed to point to a powerful personal agent within and behind it all. Faith meant responding with faithfulness and trust to that entity.

Today most of us cannot simply view the cosmos in the same way. But the appropriate response, in my opinion, is not to turn faith into a determined attempt to think about the divine in the same way as people did in the past, despite evidence to the contrary, so that such faith becomes nothing more than a vain hope that an old worldview will not collapse like a house of cards. Faith should rather be a comparably appropriate and positive response to Reality as now perceived to be by us today.

I wrote a song “House of Mirrors” which was at least in part a response to a cartoon of David Hayward’s. Perhaps “House of Cards” should become a song as well…

June 15, 2013 Statistics and the Synoptic Problem
Recent Comments
0 | Leave a Comment
"The level of insensitivity to gossip and rumors and slander in the Evangelical churches and ..."
Euro Man Christians and Internet Rumors
"VinnyJH: "I think that it's an argument [against?] Jesus being the kind of teacher who ..."
robrecht Was Paul Uninterested in the Historical ..."
"I would personally say my probability that Jesus existed is between 80-90%. I give at ..."
Chris H Was Paul Uninterested in the Historical ..."
"I am not. I am a biblical Christian.Everyone of your assertions is factually incorrect but ..."
Bob Shiloh Christians and Internet Rumors
Browse Our Archives
get the latest from
Religion Prof: The Blog of James F. McGrath
Sign up for our newsletter
POPULAR AT PATHEOS Progressive Christian
1