Neil Godfrey's latest rant includes a quote from George Orwell, and describes the fact that I will be addressing mythicism and religious freedom in a conference paper as “Orwellian.” 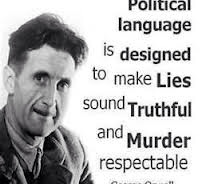 And once again, there is no evidence of awareness of Poe's Law, as a mythicist writes things that seem like a ridiculous parody, something that no one could really believe, and yet it is real and not satire.

Click through, read the post, see what is going on. Look carefully at what is being done. Look at how, despite my acknowledgment that I may have run characteristics of Brodie's student work and his attempts at publication together (since they were mentioned in the same part of the book, and if such students publish anything, it tends to be work produced in the course of their studies), Godfrey continues to focus on such minor details in order to distract from the main point, which is that Brodie's methods are problematic. They allow any conclusion one wishes to be drawn, as long as one has sufficient creativity to make connections between texts.

There is nothing inherently Orwellian about academia, in the sense that Godfrey used the term. I followed the appropriate procedures and had a conference paper accepted. If mythicists follow the same rules they can do the same. But they almost never do, making it clear why mythicism is not found persuasive in the academy: it is not due to inappropriate censorship, but mythicists not following the rules of scholarly inquiry.

But of course, no good conspiracy theorist worth their salt will buy that simple explanation, when a more convoluted one that makes them look better can be concocted.

But there most definitely is something Orwellian about mythicism. Have a read of the source of the Orwell quote, in which Orwell focuses particular attention on the use of language to defend the indefensible, and talks about how that is accomplished. And then see if what Orwell wrote about political language reminds you of the sort of language you have encountered on a mythicist blog you may have read.

And then see if you can reread Godfrey's words about psychological projection without laughing out loud.

June 30, 2013
Could You Be Wrong About Their Inability To Be Wrong?
Next Post

June 30, 2013 Goodbye, Google Reader!
Recent Comments
9 Comments | Leave a Comment
"You have misrepresented what I wrote again, and you insultingly suggest that as an academic ..."
James F. McGrath Five Reasons Why Mythicism is Disappointing
"Hoot!You have become a cartoon character.You only publish in blog posts? Those are the only ..."
Sandy Plage Five Reasons Why Mythicism is Disappointing
"You weren’t willing until now to talk about whether Judaeans is a better translation of ..."
James F. McGrath “To Your Tents, O Israel!” A ..."
"Okay, you have been warned about your trolling and lowering of the tone of discourse ..."
James F. McGrath Understanding Whiteness
Browse Our Archives
get the latest from
Religion Prof: The Blog of James F. McGrath
Sign up for our newsletter
POPULAR AT PATHEOS Progressive Christian
1 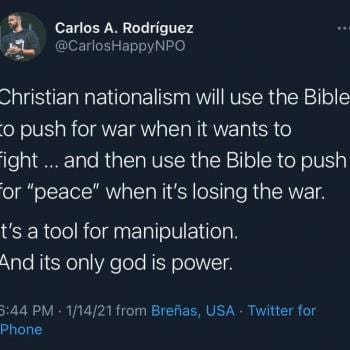 How We Came To Be Known For What...
The Church is known for what we hate. We often try to...
view all Progressive Christian blogs
What Are Your Thoughts?leave a comment
Copyright 2008-2021, Patheos. All rights reserved.