No Scientific Revelation in the Bible

No Scientific Revelation in the Bible June 28, 2013 James F. McGrath

As several other bloggers have already mentioned, Jesus Creed featured a post recently about John Walton’s emphasis on the fact that the Bible includes no scientific revelation. Here is a relevant quotation from Walton, a leading Evangelical scholar with particular expertise in Genesis: 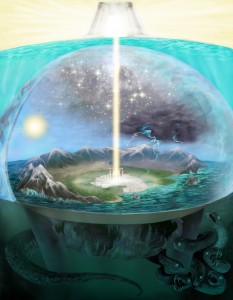 I just want to make two quick points here. The first one is that in the Bible there is no scientific revelation.That’s such an important point. Israel is not getting any new understanding of the material world, its mechanisms, its operations, or anything of that sort. No new information. Now they can observe the world, and they might make some of the same observations we make when we observe the world in our modern times. But they didn’t get that by revelation.

In other words, anything that is in the Bible about the workings of the material world were things that Israel already believed and that all the nations around them already believed. Like I mentioned with the waters, the waters above and the waters below in Genesis One. Everyone in the ancient world believed that. That’s not kind of a breakthrough revelation. And that is true all the way through the Old Testament.

Also on Jesus Creed, RJS blogged about faith and vocation as a scientist.

Elsewhere in the blogosphere, Claude Mariottini interacted with Scot McKnight on letting the Bible be the Bible. And there was a response at Jesus Creed to Claude’s suggestion that in Genesis 3, the serpent is right, having correctly grasped the divine attribute of grace and God’s penchant for changing his mind.

Nick Matzke responded to Casey Luskin. Also at The Panda’s Thumb, Richard Hoppe shared a link to an open-access article on how information about evolution is communicated.

Paul Braterman said “Don’t say Darwin unless you mean it.”

Hemant Mehta has a post about a creationist speaker spouting misinformation and claiming to represent “truth.”

Allan Bevere looked at whether conservatives consistently disagree with science more frequently than liberals. Science and Religion Today discussed the study that sparked that, providing lots of charts and data.

June 28, 2013
The Mandaeans and John the Baptist
Next Post

June 28, 2013 Reminder: Google Reader is Closing!
Recent Comments
11 Comments | Leave a Comment
Browse Our Archives
get the latest from
Religion Prof: The Blog of James F. McGrath
Sign up for our newsletter
POPULAR AT PATHEOS Progressive Christian
1