I was in the process of writing a response to Neil Godfrey’s latest accusation against me, when Joel Watts drew my attention to the fact that his blog Vridar has apparently been shut down by WordPress: 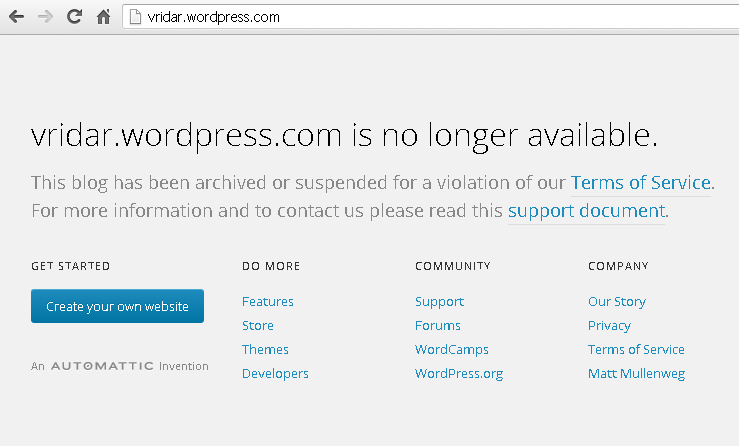 I hope this is not the result of someone who finds the content on the blog objectionable making a frivolous complaint. While I’ve often said myself that mythicism is to history what young-earth creationism is to biology, and objected to the slanderous way scholars in my field (including myself) are sometimes spoken about, filing objections against the websites and blogs that reflect such views is not going to be a successful solution. It will likely only reinforce the sense the individual or group has of being a persecuted minority that cannot get a fair hearing for its views.

To help counter that possible claim, I’d like to offer the comments area on this post to anyone who normally posts or comments and Vridar and now cannot do so. If you post about mythicism, you may expect that I or regular readers might disagree with you – but that will be nothing new, either for Vridar or here.

If you are someone who normally comments on Vridar and who was banned for troll-like behavior, e-mail me and I will gladly give you another chance. I’m even willing to ignore such things as long as they are kept in this one thread.

I suspect that Vridar will be back, since I subscribe to its feed and did not notice anything that would constitute spam or hate speech (although I admit I do not read everything posted there in detail). In the mean time, I invite any “Vridarites” who may wish to do so to be my guest and discuss, post, and comment here.