A post about philosophy and humor appeared on 3quarksdaily. It included this famous bit of humor:

There is a well-known joke about Talmudic interpretation. A Jew is talking to his Rabbi.

Rabbi,” the man said, “Explain the Talmud to me.”

“The dirty one,” answers the man.

The man smiles and says, “You just told me, Rabbi. The man who is clean washes himself because he thinks he is dirty.”

“No,” says the Rabbi. “If they each look at themselves, the clean man knows he doesn’t have to wash himself, so the dirty man washes himself.”

“I don’t know, Rabbi. Depending on your point of view, it could be either one.”

Again the Rabbi says, “No. If two men climb up a chimney, how could one man remain clean? They both are dirty, and they both wash themselves.”

The confused man said, “Rabbi, you asked me the same question three times and you gave me three different answers. Is this some kind of a joke?”

The Talmud is a famous example of seeking answers within a religious framework in a manner that does not assume there is only one possible answer. It is not infinitely open to plurality, but it regularly gives voice to minority and individual viewpoints. And in doing so, it shows that in order to seek to be faithful to a tradition, one does not have to take the fundamentalist approach of shutting down dialogue or seeking to exclude and/or silence all who disagree with one’s own viewpoint. 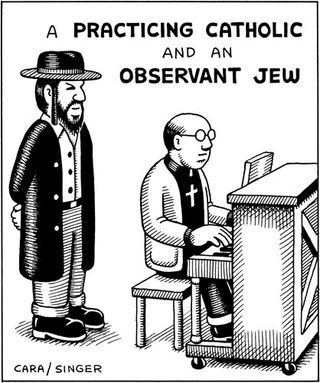 July 29, 2013 Farewell to The Old Reader
Recent Comments
2 Comments | Leave a Comment
"Under the old covenant (ten commandments), people were (and still are) racists and sexists. For ..."
Herrnhut Was Jesus a Racist?
"Reconciliation is a two-way street, restoring a broken relationship between two people. God does indeed ..."
Iain Lovejoy Forgive Us Our Debts, Not Repay ..."
"Excellent. God is not, and does not want to be, an accountant; keeping a ledger ..."
Harvey James Johnson Forgive Us Our Debts, Not Repay ..."
"Don't confuse forgiveness with reconciliation. Jesus tells us to forgive people who sin against us, ..."
Derek Thompson Forgive Us Our Debts, Not Repay ..."
Browse Our Archives
get the latest updates from
Religion Prof: The Blog of James F. McGrath
and the Patheos
Progressive Christian
Channel
POPULAR AT PATHEOS Progressive Christian
1