Beyond a Copernican Spiritual Revolution

David Hayward posted this cartoon, depicting the sea change in the direction of so many being “spiritual yet not religious”: 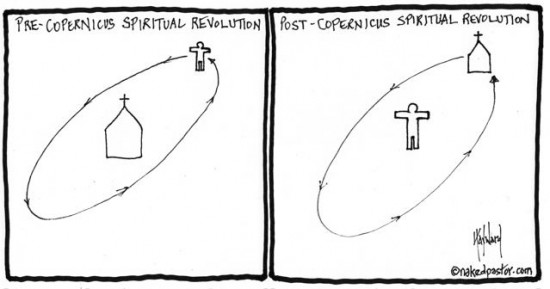 Some will find the shift from the church at the center to the individual at the center offensive and problematic. But it isn't that different from what Jesus talked about when he said “the Sabbath was made for human beings, not human beings for the Sabbath.” When people place an institution – whether a sacred text, a law, or an organization – at the center, forgetting that it is there for the benefit of people, a revolution is indeed needed.

But I don't think that this is the last revolution that is needed, any more than Copernicus' was the last revolution in our understanding of our place in the cosmos. Neither the Earth nor the sun is the center of the universe. And in the same way, I hope things keep moving towards a Tillichian revolution

I don't think that would mean envisaging both the church and the individual orbiting God as center, like the Earth and moon going around the sun – as nice a picture as that might be.

God is too big to be orbited, and to have something else beyond God in orbit around God is contrary to the very definition of God as infinite.

And so the point is better made by imagining the church, the Bible, other human-made artifacts and institutions, orbiting individual humans and groups of humans. But all of this is a small speck in a much wider reality.

Without that corrective, the shift to human beings at the center can simply be egotism. But when we remember that, if human are indeed the creators of institutions and texts, and they should serve us rather than vice versa, we as human beings have but a limited perspective, and we need the wider community of human beings to help put things in perspective, and to remember that we may be the focus of human religion in one sense, but in another, religion at its best reminds us that not only are our texts and institutions not ultimate, but neither are we.

Hopefully that revolution can keep us from being enslaved to institutions, while also allowing us to remain humble, and focused outwards rather than inwards.

And of course, whether that should be called a Tillichian Revolution, reflecting the influence on my thinking of Protestant theologian Paul Tillich, or a Jesus revolution, I will leave it to you to discuss.

Let me conclude with another cartoon of David Hayward's, which reflects his experience of the Bible being dethroned, discarded, and then cherished alongside other texts. How has your view of your relationship to texts and institutions evolved? 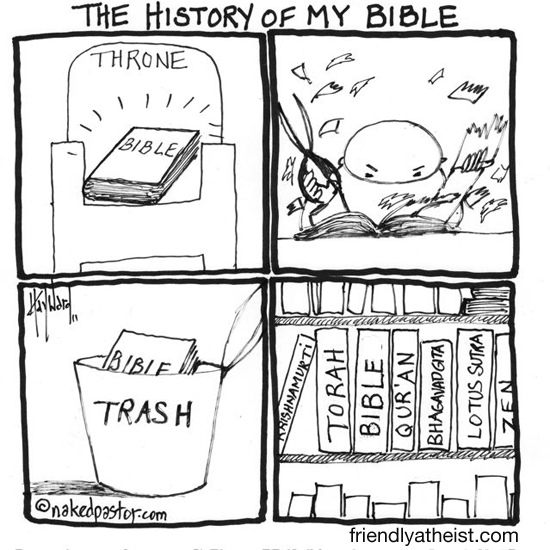 August 15, 2013
Has Your Blogging Ever Gotten You In Trouble?
Next Post

August 15, 2013 Great Name for a Wi-Fi Network
Recent Comments
2 Comments | Leave a Comment
"Quite so. And yet …If you believe that there is some clear, well-understood definition of ..."
HematitePersuasion Conservative Christianity Isn’t Christianity
""Noteworthy is that the fallacy does not occur if there is a clear and well ..."
gadfly Conservative Christianity Isn’t Christianity
"...unless one believes the Scriptures when they claim the Holy Spirit as the author.(2 Pet.1:20; ..."
gadfly Come Compromise at Crooked Creek Baptist ..."
"Yes, in the sense that Jesus' resurrection is perceived as the beginning of the resurrection ..."
Phil Ledgerwood Grace, Works, Faithfulness, and Jesus
Browse Our Archives
Follow Us!

The Future of Gen Ed Recap, Part 6
I am at long last reaching the end of this extended recap...
view all Progressive Christian blogs
What Are Your Thoughts?leave a comment
Copyright 2008-2020, Patheos. All rights reserved.