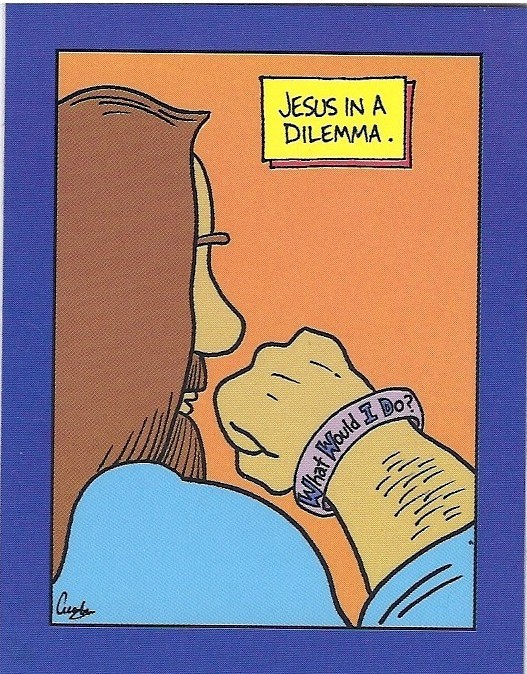 Although there is nothing wrong with asking what someone we admire would do in a particular situation, ultimately we either admire someone because we share their ideals and find inspiration in them, or because we can project our own ideals onto them. And so we really are asking not “What would Jesus do?” but “As the person I am, with the values I have, considering myself a follower of Jesus, what should I do in this situation?”

There are no cookie-cutter answers to such questions in the Gospels. Curse a fig tree? Ditch one’s parents when on a family trip? Overturn money changers? Touch people with skin diseases? Speak in parables?

Jesus is looked to in the New Testament as an example of humility. And so to envisage him asking what he would do, as though he himself is the person that he admires most, is probably – hopefully – on the wrong track.

And so is any belief that one is superior because one asks “What would Jesus do?” when others do not.

Christians are just as capable of being unlike Jesus as others are capable of resembling him more than we do. Although it may take Christlike humility to admit it.

August 8, 2013 The Most Shocking Verse in Hebrews?
Recent Comments
0 | Leave a Comment
"Sorry I didn't say congratulations right away!"
James F. McGrath Forgive Us Our Debts, Not Repay ..."
"I don't really have to. Hypocrites vigorously resist being shown to be wrong, and most ..."
Kyllein MacKellerann " QAnon Conspirituality and QAmerican Culture
"I'm not sure you'll convince anyone with that approach..."
Harold Porter QAnon Conspirituality and QAmerican Culture
"Support and responses:1> There is no means of currently making or injecting a microchip that ..."
Kyllein MacKellerann " QAnon Conspirituality and QAmerican Culture
Browse Our Archives
get the latest updates from
Religion Prof: The Blog of James F. McGrath
and the Patheos
Progressive Christian
Channel
POPULAR AT PATHEOS Progressive Christian
1