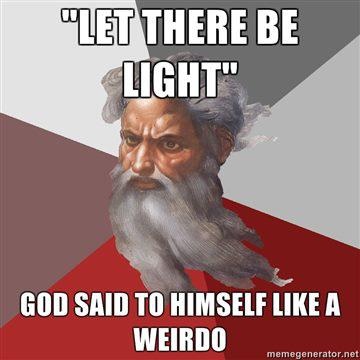 This obviously reflects, for the most part, the literalistic and contextless approach of fundamentalism. But now that religious viewpoint is treated with hostility – yet without in fact questioning its underlying assumptions.

Those who are willing to read into the text ideas that were not formulated until much later, such as the Trinity, will probably not find there to be any problem. They will envisage one person of the Godhead speaking when the others are present. Nothing weird there.

And even though the creation story in Genesis 1 does not have the Trinity in view (that concept was only formulated more than half a millennium later), it does seem to reflect the presence of multiple beings, when it says “Let us make…”

Failure to treat the text against the background of Ancient Near Eastern thought, and insisting on reading the text literally in at least some places, tends to lead to the text seeming even more absurd than it might have otherwise. When the text was written, the assumption was not that nothing at all other than God existed, but that there was chaos. God issues commands for the chaos to order itself. And whatever that chaos may have been like, without knowledge of the nature of atmosphere or that vibrations in it are required for speech to be transmitted, having God utter commands into empty space would not have seemed as problematic as it may to modern people with the knowledge that we have.

Modern literalism, whether practiced by fundamentalist Christians or the atheists they are prone to turn into, has more in common with Gnosticism than orthodox Christianity.

August 25, 2013 Josephus, Jesus, and John
Recent Comments
13 Comments | Leave a Comment
Browse Our Archives
get the latest from
Religion Prof: The Blog of James F. McGrath
Sign up for our newsletter
POPULAR AT PATHEOS Progressive Christian
1