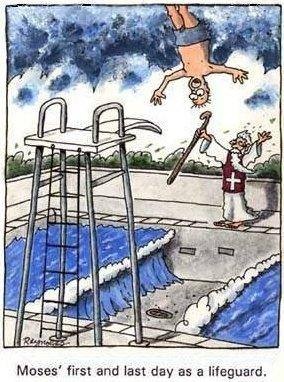 While it is just a bit of silly humor, it can be the jumping off point for a reflection on something more serious and timely.

A lot of religious believers make it a point of dogma to affirm that miracles happened as described in the Bible. But miracles, as depicted in the Bible, were never a dogma to be affirmed. They were experiences treated as God demonstrating power. No faith was required to believe that they had occurred. The issue in the stories is never faith in the sense of believing things had occurred without having evidence, but trust and faithfulness in response to the experiences the community had.

Making believing that miracles occur an axiom of faith misses the point entirely. And this cartoon illustrates what is wrong with focusing on the supposedly miraculous, impressive and human,y impossible feats. Moses is showing off his power, instead of taking care of the safety of others. That is a lot like those who focus on affirming that miracles occurred in Moses' time or whichever other. Those acts, whether they literally occurred or (as is more likely) are purely symbolic expressions of the conviction that God had been at work, elaborated and exaggerated with the retelling, they are not about showing off power but about liberation of slaves.

In our time, when people claim to be able to heal the sick, we find them going from stadium to stadium, not hospital room to hospital room.

My own view, as a liberal Christian, is that neither conservatives nor liberals ought to be debating whether miracles did or did not happen in the past, at least not as a major focus of our identity. We need to focus on serving others. Any other focus is misguided and probably egotistical. But when we get our focus right, then whether the experience of being rescued and set free that people have as a result of our stand for justice and care for others involves literal miracles, or just a subjective experience of something being too wonderful for words, we probably won't care to debate the point, because such questions lose their significance for those whose delight is to see slaves set free and the oppressed lifted up.

August 25, 2013 But Have Not Love
Recent Comments
10 Comments | Leave a Comment
"To be critical you have to know how the money is used. A lot of ..."
Euro Man If Religion Were The Key To ..."
"The level of insensitivity to gossip and rumors and slander in the Evangelical churches and ..."
Euro Man Christians and Internet Rumors
"VinnyJH: "I think that it's an argument [against?] Jesus being the kind of teacher who ..."
robrecht Was Paul Uninterested in the Historical ..."
"I would personally say my probability that Jesus existed is between 80-90%. I give at ..."
Chris H Was Paul Uninterested in the Historical ..."
Browse Our Archives
get the latest from
Religion Prof: The Blog of James F. McGrath
Sign up for our newsletter
POPULAR AT PATHEOS Progressive Christian
1