Today my class on “Religion and Freedom of Expression” met for the first time. It is a class with a non-traditional format – we meet a few Saturday mornings for a few hours, plus also four evenings when students attend lectures in our public lecture series and have dinner and a Q&A time with the speakers beforehand.

The reading was Randall Bezanson’s book How Free Can Religion Be?

which is a pretty wonderful treatment of the history of the Supreme Court’s interpretation and application of the first amendment’s establishment and free exercise clauses.

Among the topics treated is the teaching of evolution. It is easy for those of us concerned with accurate science education to ignore just how big an issue this can seem from the perspective of religious freedom – even for those of us who also value such freedom.

I am not referring here to the attempt to get young-earth creationism or Intelligent Design taught in science classes when they clearly do not belong there. What I am referring to is the fact that, by allowing the teaching of evolution in public school science classrooms, we are clearly allowing an arm of government to teach children than the religious beliefs their parents taught them are wrong.

We should not flinch at this implication. The state in a democracy has a legitimate interest in having its population be capable of distinguishing truth from falsehood, and enter adulthood with as accurate an understanding of the world as we can offer. And that social need is prioritized higher than religious freedom in this instance. It is no different, on any fundamental level, than having public schools be able to teach that the South did not win the Civil War. A parent is free to tell their children otherwise. But there is a general consensus that the rights of parents with respect to their children are not unlimited. And one could even make the case that allowing parents to indoctrinate their children with falsehoods, with little hope of exposure to contrasting perspectives, is prioritizing the freedoms of the parents at the expense of those of the children.

Bezanson’s book is a useful one for getting at these issues in a fair and even-handed way. The class also looked at how religious freedom relates to the current controversies about same-sex marriage (and its connectedness to earlier Supreme Court decisions about religious freedom and polygamy). We ran out of time before we could talk about some of the discussions that have been taking place related to Obamacare, but hopefully the conversations will continue on Moodle. 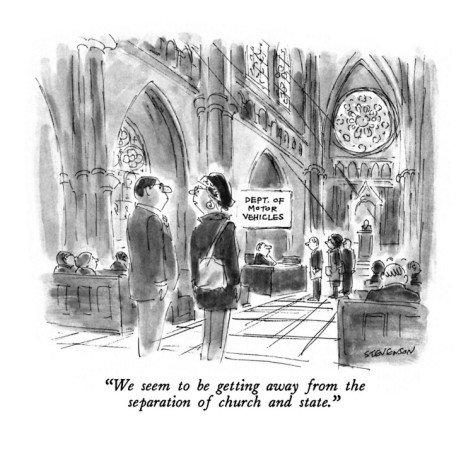