People Wrote It, You Believe Them, That Settles…Nothing

People Wrote It, You Believe Them, That Settles…Nothing September 14, 2013 James F. McGrath 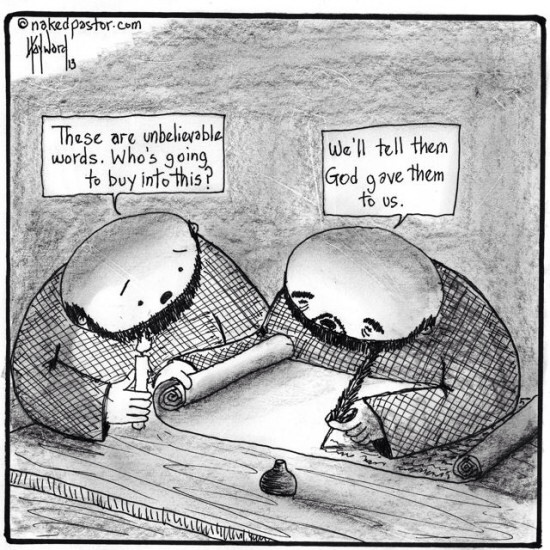 David Hayward's cartoon above gets at an important issue. I suspect that very few of the Bible's authors actually thought in this way. Most genuinely believed that their dreams, their sense of conviction, indicated that God had appointed them. Some are fairly clear that they are human beings like any others, researching, discerning, and writing in a manner that requires no special divine intervention.

But what happens next – and what happens today – are the crux of the matter. The words of prophets, the letts of Paul, other writings, come to be gathered in a collection, and esteemed together as “the Word of God.” And then people later still who have no idea who gathered these texts or why have the audacity to claim “God said it, I believe it, that settles it.”

The Bible itself shows the problem with that stance. In Jeremiah we see prophet pitted against prophet. In the New Testament we are told to be discerning even with respect to spirits, not to mention the people who claim authority or inspiration by appealing to them. In the New Testament we also see a latecomer to the Christian faith challenging an apostle and eyewitness as being wrong.

If you idolize the Bible, instead of reading and understanding it, then you might opt for the inane bumper sticker slogans that so many in our time seem to like. But if you actually read the Bible, and learn about its history, and reflect on the significance of its contents, you will probably be more inclined to recognize a much more complex state of affairs:

And that doesn't “settle it.” The Bible tells me so.

September 13, 2013
The Doctor at the Original Christmas and Easter
Next Post