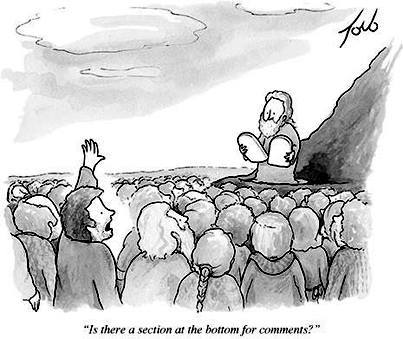 I really like this cartoon. I can well imagine someone responding by asserting that the ten commandments are definitive and leave no room for discussion or comments. But that simply isn’t true, and it has never been true historically. Even in the texts in which we find the ten commandments embedded (in a variety of forms), there are additional passages that interpret, clarify, and otherwise discuss the things that those commandments articulate. And of course, there is also the Mishnah, and the Talmud, and the teaching of Jesus, to name just a few of the ongoing string of “comments” in later times.

Fortunately most of the comments left at the “bottom” of the ten commandments have not been as inane or as vitriolic as the typical comments section at the bottom of a modern article.