God and Our Values

Some think that they can start with certain information about, and/or knowledge revealed by, God, and then proceed to extrapolate to key values. That those values end up resembling those of the individual and their culture is, we are reassured, entirely coincidental.

I’d like to suggest that the process, whether admitted or not, is always the opposite. Sometimes it happened in a previous generation, so that a later generation genuinely does embrace a vision of God and correlated valued which come from outside of it. But whether it happens in the present or happened in the past, depictions of God are always human beings articulating their values and projecting them on the ultimate.

And so what are we to do in that circumstance? It is not as though we can ignore the question of values, or can somehow bypass human language, concepts, understanding, beliefs, and values and get directly to divine ones.

Rather, the best that we can do is to make our focus truly transcendent, seeking to broaden our vision to include not just our family, tribe, nation, or group, but all humankind, all beings, and even the entire cosmos inasmuch as we have glimpsed it.

Then at least the values and symbols that we project onto the ultimate will themselves be appropriate pointers towards the ultimate, rather than merely a projection of our narrowest and most bigoted instincts. When the latter is what we treat as divine, it tends to be a truly toxic concoction. 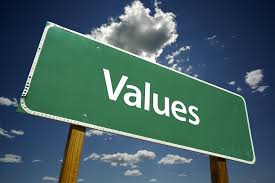