My colleague Brent Hege recently gave an excellent lunchtime talk about the Creation Museum, focusing on how the phenomenon of “creation science” is a radical departure from historic Christianity in its definition of key concepts such as faith.

As he was talking about the circularity of the argument presented in the Creation Museum, I found myself recalling something I had heard about the Nigerian bank scam e-mails that we've all seen.

The latter often seem to be so riddled with errors of language that it is hard to believe that anyone could fall for them. But it has been suggested that that is intentional. Only those who will not notice such details are likely to fall for the ongoing scam and give away money and/or personal information. If the scam e-mail was written credibly, people with slightly less honed hoax-detection skills might take the first step, then realize what is going on, and get angry and notify authorities. It is better to weed out from the start all but the most gullible. A poorly-worded e-mail increases the chance that they, and they alone, will take the next step – and of course they are the ones most likely to continue all the way to the end.

In the same way, only the truly gullible or poorly informed will fall for the Creation Museum's claims. Those who don't know enough church history or haven't read enough Augustine to realize that the claims being made there are recent and modern ones rather than expressions of historic Christianity. People who won't see that the claims being made about “Man's Word” vs. “God's Word” actually have the words of human beings on the side that is allegedly the words of God. People who don't know that what is being offered is not just at odds with the scientific evidence, but also with the Bible as understood by scholars who place it in its historical and cultural context.

Schliermacher warned about this back in 1829, and he was simply following the lead of Augustine and many others whose approach to Christian faith the folks at Answers in Genesis reject. Schleiermacher wrote:

What then do you suppose the future holds, not only for our theology, but for our evangelical Christianity? . . .Do you intend to barricade yourself behind … fortifications and cut yourselves off from science? The barrage of ridicule to which you will be subject from time to time causes me no concern, for it will do you little harm once you are resigned to it. But the blockade! The complete starvation from all science, which will follow when, because you have repudiated it, science will be forced to display the flag of unbelief! Shall the tangle of history so unravel that Christianity becomes identified with barbarism and science with unbelief? To be sure, many will make it so. Preparations are already well underway, and already the ground heaves under our feet, as those gloomy creatures who regard as satanic all research beyond the confines of ancient literalism seek to creep forth from their religious enclaves.

Would that we could find a way to lead young-earth creationists back to historic Christianity, of the sort expressed by Augustine:

We are talking about God; so why be surprised if you cannot grasp it? I mean, if you can grasp it, it isn’t God. Let us rather make a devout confession of ignorance, instead of a brash profession of knowledge.

But alas, like the Nigerian bank scammers, they are making a profit, and as long as that is so, are unlikely to repent of their sinful ways. But in the mean time, the question remains of how we can help protect more gullible people from being duped and having their lives ruined by scammers and swindlers. 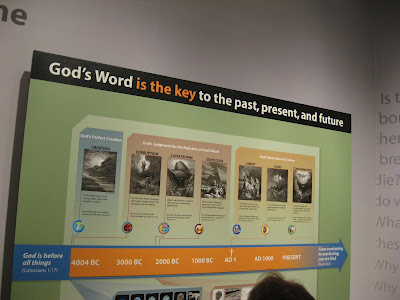