While Ken Ham expressed surprise a while back that he agrees with atheist Bill Maher, it shouldn’t surprise anyone. There are a great many atheists and fundamentalists who are the mirror image of one another. They accept or reject Christianity understood as the same superficial set of implausible claims. There is no awareness of Biblical scholarship or the study of literature that might allow them to appreciate that there is more going on in stories than just either factual historical reporting or gullible reporting of lies.

Reading Ham’s post, I am reminded once again of John Dominic Crossan’s words about two people debating over Aesop’s fables, one taking them as proof that animals could talk in ancient Greece, the other taking them as proof that the ancient Greeks were stupid enough to believe that animals could talk. The possibility is not entertained by either that the fables could belong to a genre of literature that renders their disagreement about them itself silly.

October 4, 2013 Obama's Faith
Recent Comments
24 Comments | Leave a Comment
Browse Our Archives
get the latest from
Religion Prof: The Blog of James F. McGrath
Sign up for our newsletter
POPULAR AT PATHEOS Progressive Christian
1 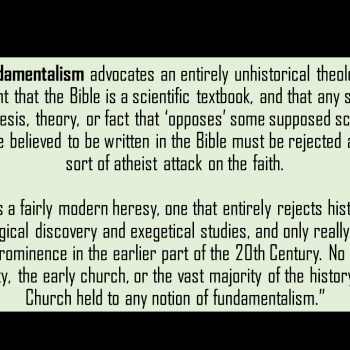