Day of the Doctor Decision

Academics in the field of religion who are also fans of Doctor Who are finding themselves torn. The major conferences in our fields, the annual meetings of the Society of Biblical Literature and the American Academy of Religion coincide with the broadcast on television – and showing in theaters in 3D – of “The Day of the Doctor,” the 50th anniversary episode of Doctor Who.

I have a ticket to see it at the theater nearest Baltimore that I could find. But it is turning out that to get there will involve choosing to miss at least part of sessions and papers that I am interested in (ironically including one about Doctor Who!) as well as a reception that is typically the best at the conference, hosted by the publisher of the book I edited, Religion and Science Fiction

I can’t seem to find information online at this point about whether the episode will be shown in theaters again after November 25th. If anyone has such information, please share it with me! Otherwise, if I do not see it then, they are bound to release a 3D DVD at some point, right?

I’m sure that I will manage to see it somehow. I’m just wondering whether there isn’t some chance that there will be a repeat showing in a movie theater so that I can see it there in 3D. In the meantime, here is the brief synopsis of the episode that the BBC has released.

In related news, there is apparently a minisode (perhaps a prequel?) in the works called “The Last Day” which is of obvious interest to those fascinated by Doctor Who’s religious themes. And this great image about waiting for an older Doctor comes to us courtesy of Brian of Morbius: 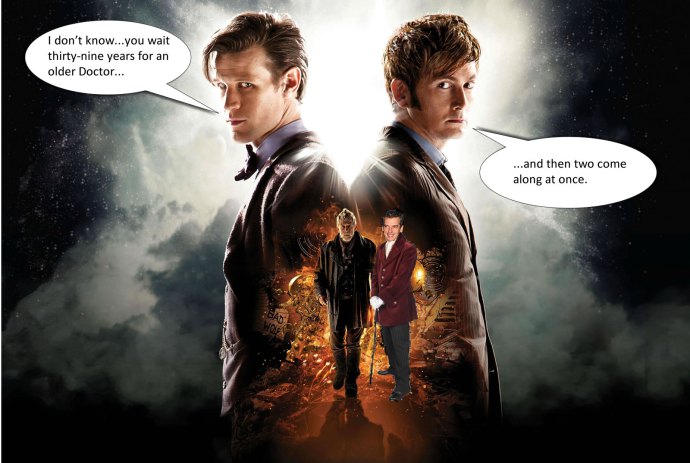 Here is the trailer for “The Day of the Doctor” in case you haven’t seen it:

November 4, 2013 Is Immortality a Curse?
Recent Comments
12 Comments | Leave a Comment
"There will be two more Whitaker episodes after the New Year special - probably one ..."
Scurra Doctor Who: Flux
"Sontarmageddon"
TrevorN Doctor Who: Flux
"It's particularly amusing that the endorsement is attached to the KJV bible that was written ..."
rationalobservations? Warning Labels for Christianity?
"Just did a blog post trying an LGBTQ+ friendly interpretation of Christian origins. Check it ..."
John MacDonald Struggling with Homosexuality
Browse Our Archives
get the latest updates from
Religion Prof: The Blog of James F. McGrath
and the Patheos
Progressive Christian
Channel
POPULAR AT PATHEOS Progressive Christian
1