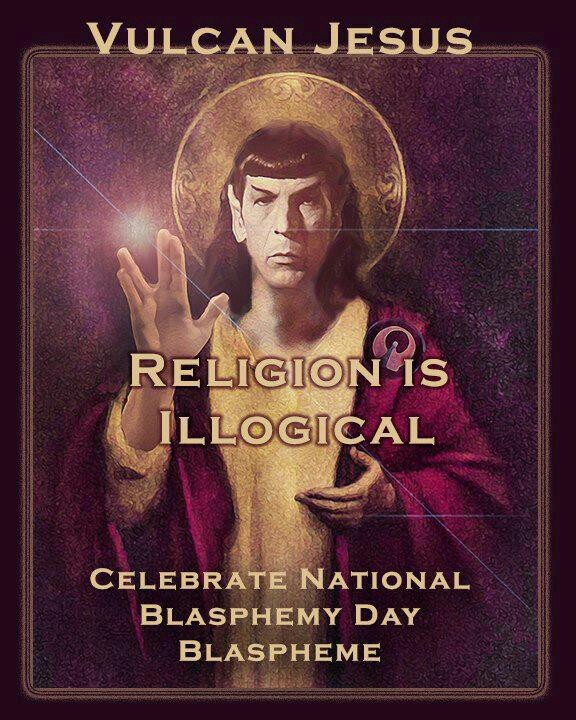 I came across this on Pinterest and thought I would share it – and not only because it is firmly at the intersection between religion and science fiction. Spock was arguably the most openly religious character on the Enterprise – he had rituals and practices of a sort that no other crewmember was shown to have. Vulcan religion certainly seems to be non-theistic, and focuses on logic, but that simply illustrates that Zen Buddhism was the pattern on which it was based. It is illogical to use the most religious figure on a secular show to make the point that religion is illogical.

Beyond that, there is something intriguing about the use of a Vulcan in an attempt to commit blasphemy. Who exactly would find this blasphemous, and why? But more importantly, who thinks that this attempt at making a blasphemous image is logical and in the spirit of being Vulcan? And why make the figure in question “Vulcan Jesus”?

I suspect that there are probably at least as many Star Trek fans who would find the Jesusing of Spock blasphemous, as there are Christians who would object to the Spocking of Jesus.

So much of interest here to talk about!

November 7, 2013
Time and Relative Dimensions in Faith Arrives
Next Post

November 8, 2013 Why People Reject Evolution
Recent Comments
8 Comments | Leave a Comment
Browse Our Archives
get the latest from
Religion Prof: The Blog of James F. McGrath
Sign up for our newsletter
POPULAR AT PATHEOS Progressive Christian
1