There are so many wonderful little details in Doctor Who that one is liable to miss the first time around. For instance, how did I miss until recently that, in the episode “The End of the World,” a computer makes the following announcement:

Shuttles five and six now docking. Guests are reminded that Platform One forbids the use of weapons, teleportation and religion. Earth death is scheduled for 15:39, followed by drinks in the Manchester suite.

There are lots of ways that one could take this. One might be to note that the first two rules are broken, including by the Doctor himself (the TARDIS’ arrival is a form of teleportation), and it isn’t clear that the presence of religion would have made matters any worse. Another would be to note that rituals are performed and the witnessing of the Earth’s destruction may be mere entertainment to some, but has a solemness for others.

Doctor Who mentions religion often. Many times it is a jibe of some sort, but not always. Often the reference is humorous, and if it isn’t, it is probably disturbing or depressing.

But beneath the surface, there is usually some profundity.

Few swear off weapons entirely. Not even the Doctor does that. And few oppose teleportation in principle, but most would recognize that it needs to be restricted.

And so the jibe at religion need not be considered a statement that religion is dangerous and ought to be prohibited under all circumstances. Rather, it recognizes that the end of the world is precisely the moment in conjunction with which religion tends to become dangerous. And so ruling it out on this space station makes sense. But that doesn’t mean that it cannot have its place, even in the Whoniverse.

Today there is a conference about Doctor Who and religion taking place in Manchester, England. I hope that the rest of us – and even some at the conference – will take this opportunity to have a Doctor Who synchroblog. It isn’t too late to join in – and if you do, please let me know about your post! 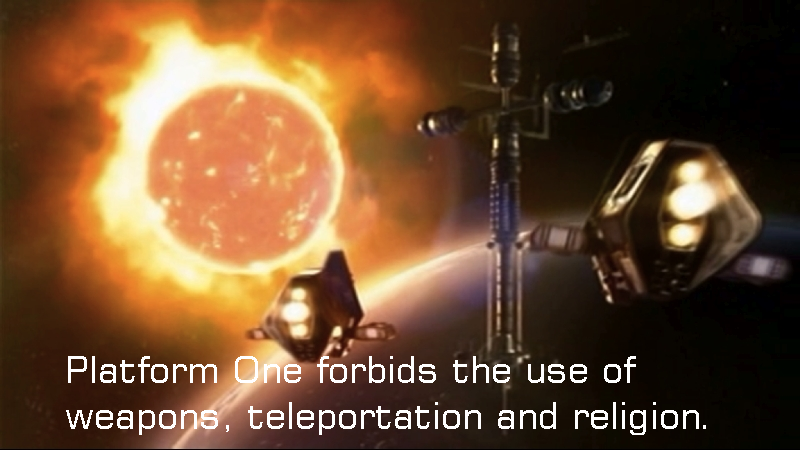 Of related interest, take a look at this genuine science paper with Doctor Who illustrations!