Away Team in a Manger

A blog commenter as well as someone on Twitter drew my attention to the #SciFiXmas hashtag that had been trending on Twitter. There were some clever mash-ups of science fiction names and titles with Christmas carols and other such things. One of my favorites was “Away Team in a Manger.” Not surprisingly, there have been several Star Trek themed nativities. Here’s one example: 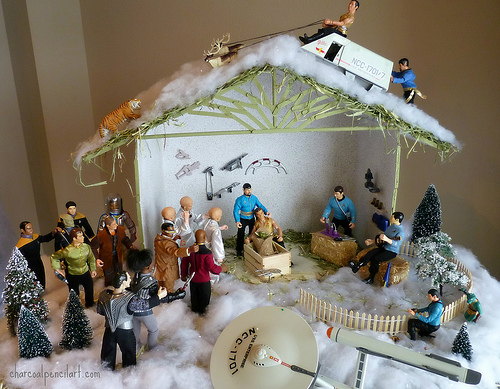 It is worth mentioning once again that a manger is a feeding trough, and so this does not actually depict an away team in one of those. Jesus was probably not born in a stable, but he certainly wasn’t born in a manger.

It is probably also worth mentioning that, in the traditional calendar, this is the second day of Christmas, and so it is not too late to share nativity sets (science fictional or otherwise) nor to sing carols.