Judy Redman has posted a reply to my own post about memory and orality yesterday. Judy writes:

I agree that having composed something doesn’t mean that you will remember it word for word. I do think, however, that when a person has composed a story to illustrate a particular point, s/he is much more likely to reproduce the significant points accurately than is someone who has just heard it. I also think that when you are retelling your own story, you are more likely to use similar wording for subsequent retellings than is someone else who is retelling it from your ‘original’ because you talk like you and they don’t. I therefore think that Jesus is likely to have retold reasonably close versions of his parables, so the disciples would have heard essentially the same thing several times.

I don’t disagree with anything she wrote, but because there is such potential for those of us living in a highly literate culture to take certain things for granted, I want to make sure that some potentially ambiguous language is understood as I intended. I also want to go into more detail on some points.

When someone composes a story (let’s say a joke) and tells it more than once, perhaps frequently, it will probably improve over time. The gist may or may not stay the same – it really depends on whether the story’s author wants to change it or not. And so we cannot presume the story’s stability as a result of multiple retellings by the person who composed it. All that we can presume is that the author’s intention is consistently present even if the story changes (although even that may be too much, since the author could well feel that an earlier version was better, but find it impossible to remember it exactly). 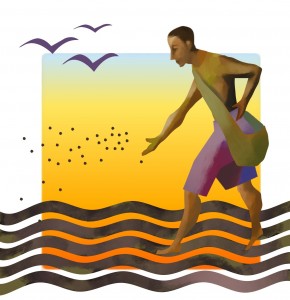 If the author of the story never writes it down, then there is simply no basis for the author or anyone else to talk about verbatim reproduction. This is what is meant when experts in the study of oral cultures and oral tradition say that there is “no original version” but only “multiple performances.” The author and/or others can tell the story, and the gist may well remain the same. But the original is never written down, and thus cannot be repeated verbatim even by the author. There is simply no way to do this, or to tell if it has been done, without some method of recording being utilized.

This need not lead to pessimism, except for those who hoped to be able to get Jesus’ precise verbatim words, or those of any other historical figure who delivered an unwritten speech in the era prior to audio recording technologies. We have good reason to conclude that we have the gist of a saying of Jesus in a number of instances, and where translation back into Aramaic uncovers word play and other such features which tend to be recalled, there is reason to think that we may have the very words of Jesus. But such instances will be the exception, rather than the rule, not because of any issue unique to the quest for the historical Jesus, but because of the nature of memory, orality, and history themselves.

December 31, 2013
The Musical Gospel of Mary Magdalene
Next Post

December 31, 2013 Overtime
Recent Comments
11 Comments | Leave a Comment
"I thought the one of the points of the incarnation was that Jesus became fully ..."
Iain Lovejoy Divinity and the Learning Jesus
"More information than we have ever needed or wanted. None the wiser."
Matthew Christians and Internet Rumors
"None. Why do you ask?"
James F. McGrath Tampering with the Words of the ..."
"I'm not sure what led you to this bit of satire from almost 13 years ..."
James F. McGrath Obama Confesses To Being Hindu Muslim ..."
Browse Our Archives
get the latest from
Religion Prof: The Blog of James F. McGrath
Sign up for our newsletter
POPULAR AT PATHEOS Progressive Christian
1