Sabio Lantz shared the following image on his blog: 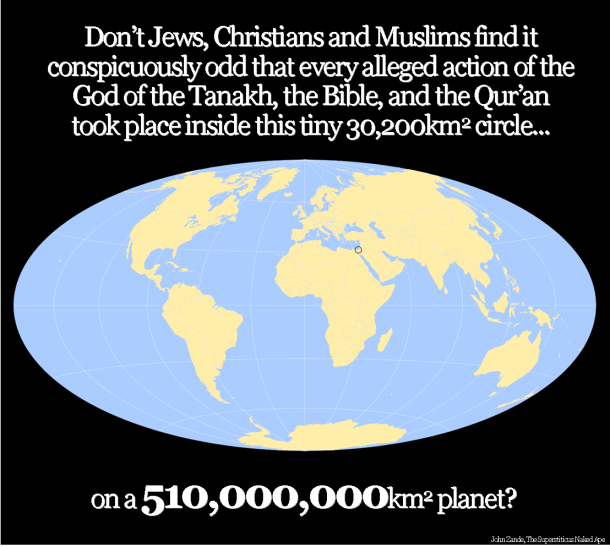 One could point out the ignorance of the person who made the image, clearly unaware that the three traditions collectively would expand the range of God’s action, just in the stories told in their Scriptures, into the Arabian peninsula, Turkey, Greece, and Egypt, at the very least.

Or one could go further than the image’s math does, and add some estimate of the size of the universe – we cannot be absolutely certain quite how large it is, but we can say that it is at least some 92 billion light years across, based on the part of it that is visible to us. (Visit and explore this cool interactive site on the scale of the universe).

The latter approach makes an important point, despite the problems with the graphic. But it doesn’t mean that there is no God, or anything of that sort. What it does indicate is the arrogance of any human being claiming to have the definitive perspective, as though everything important happens in their corner of the planet, or of the universe – or exclusively in their religious tradition, nation, or species.

January 21, 2014 Noah's Precursor
Recent Comments
17 Comments | Leave a Comment
"Well, now I want to write a book called QAnon in the Bible about the ..."
Phil Ledgerwood Warning Labels for Christianity?
"Are you suggesting that there hasn't been a particular widespread bigotry towards blacks among whites ..."
James F. McGrath At What Point Repentance?
"Thanks for that Conspiracy Theory article link - it articulates the argument well about the ..."
Scurra Warning Labels for Christianity?
"Self-reflection is a good thing. You should try it. "I am not surprised that a ..."
Cat At What Point Repentance?
Browse Our Archives
get the latest from
Religion Prof: The Blog of James F. McGrath
Sign up for our newsletter
POPULAR AT PATHEOS Progressive Christian
1