Steve Chalke on the Bible 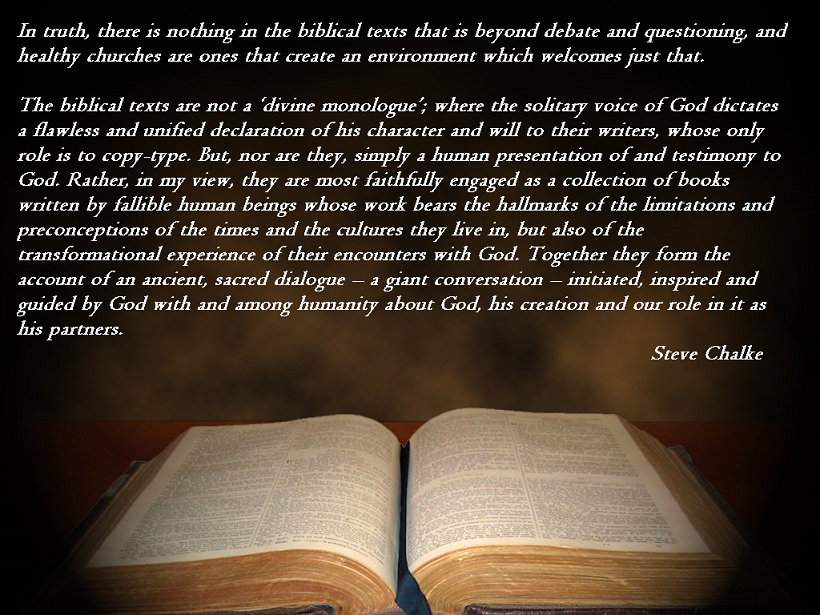 Steve Chalke is an extremely well-known Baptist minister in the UK. He has had some really interesting things to say about the Bible recently, including the quote I turned into a meme above.

In truth, there is nothing in the biblical texts that is beyond debate and questioning, and healthy churches are ones that create an environment which welcomes just that.The biblical texts are not a ‘divine monologue’; where the solitary voice of God dictates a flawless and unified declaration of his character and will to their writers, whose only role is to copy-type. But, nor are they, simply a human presentation of and testimony to God. Rather, in my view, they are most faithfully engaged as a collection of books written by fallible human beings whose work bears the hallmarks of the limitations and preconceptions of the times and the cultures they live in, but also of the transformational experience of their encounters with God. Together they form the account of an ancient, sacred dialogue – a giant conversation – initiated, inspired and guided by God with and among humanity about God, his creation and our role in it as his partners.

Click through to read the rest of his article. And if embracing this view of the Bible represents a paradigm shift for you, then Benjamin Corey’s blog post about coping with such shifts may also be of interest.