Are Christians Persecuted in the United States?

The answer, of course, to the question posed in the title is obviously “yes.” People of every possible view get persecuted in some way in every society, especially if one defines persecution broadly enough to include things like “being called stupid by a complete stranger on Facebook.”

But since by that definition every category of people is persecuted, then clearly Christians are not being singled out.

We could easily add that there are liberal to moderate Christians who find themselves bullied, harrassed, and losing their jobs in the United States. But since the perpetrators are conservative Christians, it may be inappropriate to put “persecution of Christians by other Christians” into this category.

But if we narrow the question, to ask whether there is a state-sponsored attack on Christians or curtailment of their rights, other than in instances in which the restriction is protecting the rights of others, then I think the answer is clearly “no.”

P. Z. Myers shared this chart spelling out how to tell:

Bruce Gerencser took a different approach, pointing out that, in a context of organized persecution of Christians on a societal or governmental level, this car would not be able to drive around without being seized and confiscated: 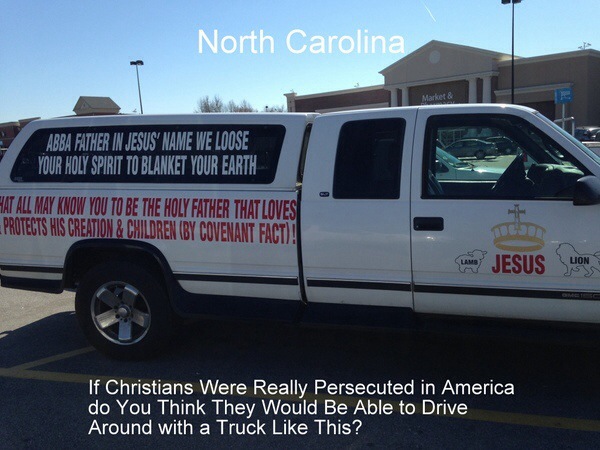 Presumption not Faith
From stories like these (here, here, and here), one could credibly assert...
view all Progressive Christian blogs
What Are Your Thoughts?leave a comment
Copyright 2008-2020, Patheos. All rights reserved.