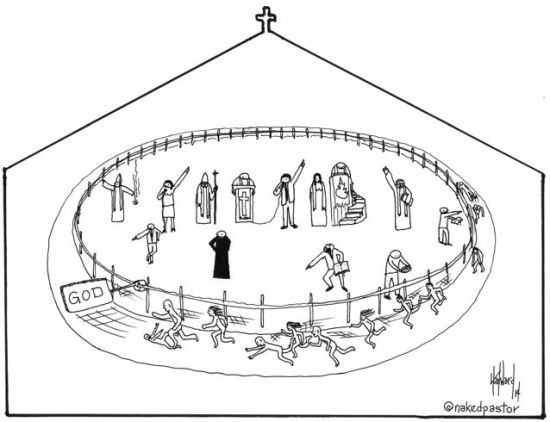 This cartoon by David Hayward reminded me of the carnival games which, if you didn’t know it already, tend to be rigged, or at the very least are much more difficult to win than you are led to believe. Religions and their adherents often take advantage of the fact that knowledge about God is elusive, and a sense of connection with God fleeting, prizes that may consistently seem just out of reach. And so they hold up a target and say that it offers the prize you are looking for, and that you should be able to hit it – if you spend enough time and money at their particular booth.

The difference between that and a genuinely supportive religious community fostering genuine spirituality is a simple one. In the latter, those who were there before you will admit that they have missed the target – over and over again. If they believe that they have genuinely found and connected with God, it won’t be a matter of boastful pride. Because they will have come to understand that the race itself has helped them grow and mature.

They will help you to understand that God is not a giant stuffed animal that you can win, if you just pick the right game and happen to be really, really skilled at it. They will help you to understand that any religion which offers you a neatly packaged deity with the loose ends all tied up is offering you an idol which may sometimes be a comforting substitute for God, but ultimately disappoints, because it isn’t the real thing.

March 12, 2014 Bible Wear and Tear
Recent Comments
0 | Leave a Comment
"What a bizarre comment, from someone who knows they didn’t pay anything to listen to ..."
James F. McGrath ReligionProf Podcast with Roger Sneed
"They look like grinning idjits because they conned some folks into payinng money to hear ..."
Judgeforyourself37 ReligionProf Podcast with Roger Sneed
"James, do you think the Gospel writers were writing what they believed to be historical."
Leigh Sutherland Mythicism, Isnads, and Pseudepigrapha
"One is inherently unlikely. The other is simply at odds with the available evidence. Why ..."
James F. McGrath Mythicism, Isnads, and Pseudepigrapha
Browse Our Archives
Follow Us! 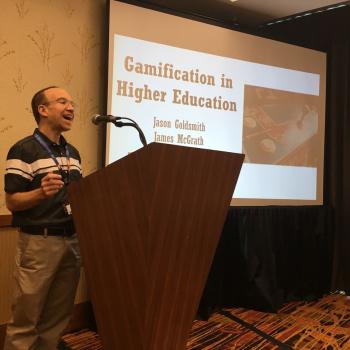