The Path to Discerning God’s Will

We had a really interesting discussion in my Sunday school class today. The focus was on the idea of God's will, and the view some Christians hold that there is a perfect will of God for each life, including where one should study, whom if anyone one should marry, where one should work, and so on.

As we read Romans 12:1-2, I was struck by the implications of the wording as never before. That passage reads:

Therefore, I urge you, brothers and sisters, in view of God’s mercy, to offer your bodies as a living sacrifice, holy and pleasing to God—this is your true and proper worship. Do not conform to the pattern of this world, but be transformed by the renewing of your mind. Then you will be able to test and approve what God’s will is—his good, pleasing and perfect will.

In a parallel universe, if Paul had held the view of Scripture that modern day fundamentalists claim to, we might find him telling people to simply read the Book in order to find God's will. But in our universe, Paul said something incompatible with that. He said that one must test and approve what God's will is. In other words, one must figure it out. And the way to do that does not begin by reading texts, but by offering oneself self-sacrificially, in a way that leads to inner transformation.

As I have mentioned before here, someone could embrace the core principles articulated by Jesus, and yet still act like the priest and Levite in Jesus' parable about the good Samaritan. Putting God first could be treated as meaning that one should scrupulously follow the Torah – which has very specific and stringent stipulations about priestly purity. If the man who was lying by the side of the road turned out to be dead, the priest would have become ritually defiled, unable to carry out his priestly duties. If the man was dead, the Torah required that he be buried before sunset – but not by a priest. A priest was not to defile himself unless the deceased were a very close relative. Leviticus 20 spoke clearly on this.

And so let us make no mistake about it. Jesus criticized the priest for obeying Scripture.

Paul, in keeping with the emphasis in the teaching of Jesus, indicates that one starts by living and worshipping a certain way, and then discerning according to that way of life.

You can stick closely to the Bible and yet be not merely far from, but diametrically opposed to, what Jesus taught. Because, despite what some religious people say, morality is not something that one has to find written in a book or some other outside source. Morality is when we do to others what we would wish done to us, moved by compassion and empathy, until we come to recognize that it doesn't take anyone else's command or decree to make caring for others the right thing to do. 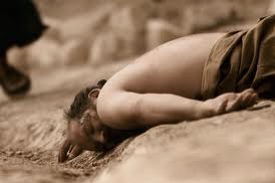 March 30, 2014
Marduk and Sekhmet in the Office
Next Post