My Bacon Number is 3

Someone shared the “Oracle of Bacon” on Facebook. Through it, I learned that I have a Bacon Number of 3, assuming that one is calculating connections of all genuine friends and acquaintances, and not only people who were in movies together.

Krystina Ptasinski, an actress who majored in religion as well as theater at Butler University, has a Bacon Number of 2. And since I know Krystina, that makes my Bacon Number 3. And if you are acquainted with me, that makes yours a 4, unless you have a closer connection by another route.

Can “reads the blog of” be a close enough connection for this purpose? If so, then you can follow Kevin Bacon on Twitter and have a Bacon Number of 1.

But if blog reading and Twitter following doesn’t cut it for these purposes, then I wonder whether we could attract majors to Butler University’s religion program by pointing out that taking classes and becoming acquainted with the professors will boost your Bacon Number?

In related news, my colleague Brent Hege pointed out that Rashida Jones majored in religion and philosophy at Harvard. And so that needs to be added to all the “What you can do with a degree in religion” lists.

Finally, if you have determined that your Bacon Number is 4 as a result of your acquaintance with me, then I would point out that, according to Google, you share the same Bacon Number as Ludwig van Beethoven: 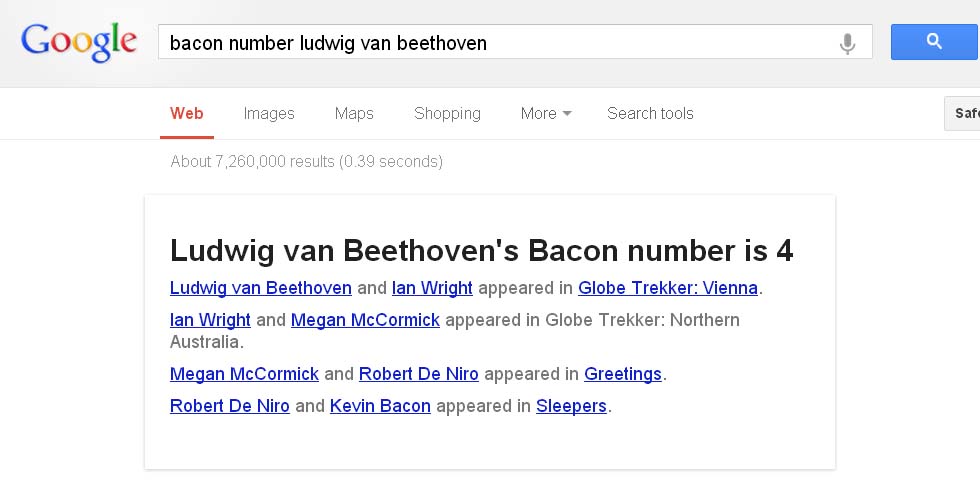 Still looking for more out of this post? Or are you perhaps a millennial who read this post and is still trying to figure out who Kevin Bacon is? This may help:

March 12, 2014 If God Needs Money
Recent Comments
3 Comments | Leave a Comment
"It's particularly amusing that the endorsement is attached to the KJV bible that was written ..."
rationalobservations? Warning Labels for Christianity?
"Just did a blog post trying an LGBTQ+ friendly interpretation of Christian origins. Check it ..."
John MacDonald Struggling with Homosexuality
"Probably the same religion that brought us public schools, mass public hospitals, the scientific revolution, ..."
Chris H Michele Bachmann Cites Famous Social Justice ..."
"I wonder what religion it was that was responsible for the genocide of the Native ..."
Hutchins Michele Bachmann Cites Famous Social Justice ..."
Browse Our Archives
get the latest updates from
Religion Prof: The Blog of James F. McGrath
and the Patheos
Progressive Christian
Channel
POPULAR AT PATHEOS Progressive Christian
1