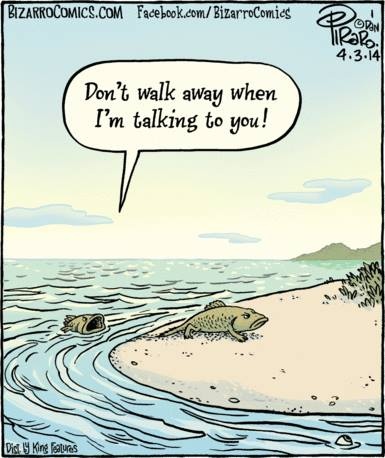 Today's Bizarro comic is funny. But having spent some time today talking with someone who genuinely seemed to believe that biological evolution meant a fish suddenly sprouting legs or even turning into a human being, it seems necessary to address the popular misunderstanding that could be reinforced by the cartoon. Many of us have wished at some point that we could sprout wings and fly away from some difficult circumstance. None of us did so. Evolution involves slow changes, largely invisible except on time scales much longer than a human lifespan. It bears mentioning that – however much fun it might be to imagine Tiktaalik having suddenly turned fins into feet in order to get away from nagging or whatever else it may have been. When scientists talk about conflict or competition being a factor in evolution, this isn't what is meant.