How High is Kyrios Christology?

How High is Kyrios Christology? May 8, 2014 James F. McGrath

Nijay Gupta has offered a reply on his blog to my post which was critical of his claim that, since Jesus is referred to as “lord” in the New Testament, and “lord” could be used to refer to God, therefore Jesus was being identified with God.

My complaint was, in the first instance, about the way the equation was presented, which seemed to me far too simplistic.

But as Nijay points out, there are passages in the New Testament where Biblical texts which refer to “the Lord” – or in the Hebrew to Yahweh – are applied to Jesus. 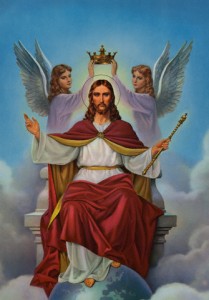 How should such passages be understood? I think that we have a clear answer given within the New Testament (although there is relevant background to be found outside it).

In Philippians 2:6-11, Jesus is “hyper-exalted” to a status beyond any that he is said to have had before. In the process, he is given the “name that is above every name” – i.e. the divine name. That name is explicitly said to be given to him by the one who exalted him, namely God. It is not said to be something that he possesses as part of his nature – on the contrary.

And so the New Testament kyrios Christology is indeed rightly called a “high” Christology. It has a human being exalted to a status second only to God himself, and having bestowed upon him the very name of God, enabling him to exercise rule over all things on God’s behalf.

Calling such a Christology “low” would be inaccurate. But so too would be claiming that these texts depict Jesus as sharing in the divine “nature.”

When Nijay writes that “It is hard to read 1 Cor 8:6 and not think that Paul’s own use of Kyrios for Jesus is a “Most High” divine title,” I have to disagree. The text sets Jesus alongside the one God. It doesn’t divide God into one God and one Lord.

And so, in short, I think I was right to emphasize that the mere use of “lord” is not in and of itself indicative of divinity, and Nijay was right to push back that some instances of the title in the New Testament apply Yahweh texts to Jesus. But carrying the discussion further, I think that the New Testament texts themselves indicate that the Hebrew Bible texts applied to Jesus are understood to apply to him because God has bestowed the divine name Yahweh upon him, and not because he is a figure who shares eternally in the divine nature. The latter seems to clearly represent a historical development out of the relevant textual data, and not something that those texts presuppose or assert.

See also Ken Schenck’s post (giving in to the siren call from Nijay, myself, and other bloggers) raising the question of what the consensus on Christology is at the moment. It seems to me that there is still the same longstanding tension between scholars who seek to find ways to defend traditional credal Christology as being an accurate representation of what the New Testament says, and scholars who regard later Christology as a significant development beyond what the New Testament texts (and particularly the earliest of those texts) say.

UPDATE: See now also Nijay’s post on Gathercole’s chapter in the response book, as well as Dustin Smith’s post interacting with Nijay and myself.

May 8, 2014
Galileo was Wrong (Richard Carrier and Arguing from Consensus)
Next Post

May 8, 2014 Science, Religion, and Culture (New Journal)
Recent Comments
50 Comments | Leave a Comment
Browse Our Archives
get the latest from
Religion Prof: The Blog of James F. McGrath
Sign up for our newsletter
POPULAR AT PATHEOS Progressive Christian
1