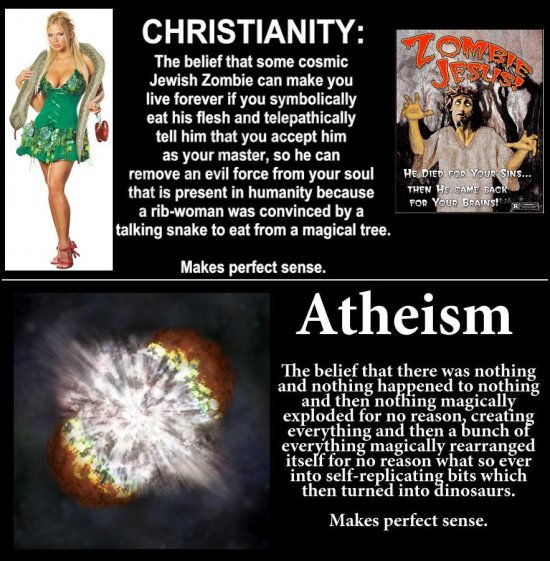 I saw the image above on FunnyJunk and liked that it took the caricatures that some Christians and atheists offer of each other, and placed them side by side. I doubt there are many who would genuinely recognize either description as an accurate portrayal of their own worldview. But that doesn’t seem to prevent them from sharing caricatures of their opponents.

But the fact that anyone stereotypes in this way is truly despicable, and contributes to the demonization and dehumanizing of others who are like themselves.

It is better not to stereotype at all. But if you cannot avoid it altogether, then apply the Golden Rule: stereotype others the way you would want to be stereotyped.

May 18, 2014 Bamboozle
Recent Comments
45 Comments | Leave a Comment
"I doubt there are any specific requirements to attend."
James F. McGrath Bratislava Conference 2022 – Receptions of ..."
"Are non-academics allowed to attend this online conference?"
LivingEND Bratislava Conference 2022 – Receptions of ..."
"It doesn't translate words. There is a long history of finding significance in individual letters, ..."
James F. McGrath The “Original Aramaic Lord’s Prayer” is ..."
"You can see that in the spirit of what he is doing."
bflaherty The “Original Aramaic Lord’s Prayer” is ..."
Browse Our Archives
Related posts from Religion Prof: The Blog of James F. McGrath