A couple of people on Facebook mentioned an article about a new English language Bible translation, the Modern English Version (MEV for short). The website for the translation, quoted in the article, says the following:

Every effort is made to ensure that no political, ideological, social, cultural, or theological agenda is allowed to distort the translation. The Scriptures are accurately translated without loss, change, compromise, embellishments or distortions of the meaning of the original text.

The claims are nonsensical in and of themselves, since no one ever fully realizes the extent to which their social, cultural, theological and other assumptions influence their perceptions. That the folks at Charisma think otherwise is sadly ironic. 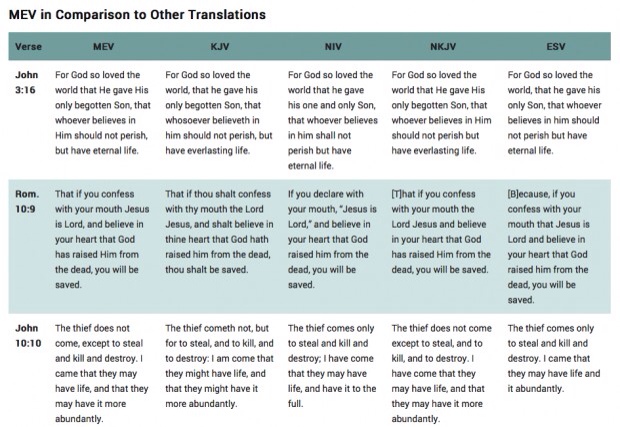 Oh, and they also claim it is a “word for word” translation. In fact, it is just an updated King James Version.

May 29, 2014 Ascension Deficit Disorder
Recent Comments
24 Comments | Leave a Comment
"There will be two more Whitaker episodes after the New Year special - probably one ..."
Scurra Doctor Who: Flux
"Sontarmageddon"
TrevorN Doctor Who: Flux
"It's particularly amusing that the endorsement is attached to the KJV bible that was written ..."
rationalobservations? Warning Labels for Christianity?
"Just did a blog post trying an LGBTQ+ friendly interpretation of Christian origins. Check it ..."
John MacDonald Struggling with Homosexuality
Browse Our Archives
get the latest updates from
Religion Prof: The Blog of James F. McGrath
and the Patheos
Progressive Christian
Channel
POPULAR AT PATHEOS Progressive Christian
1