Doctor Who: Invasion of the Dinosaurs

The dinosaurs from the Doctor Who episode “Invasion of the Dinosaurs

“, although not terrible by the standards of the time, look really awful to some modern viewers spoiled by more advanced CGI special effects. When I rewatched the episode recently, perhaps I had duly lowered expectations, but I didn’t find that the special effects detracted from the story.

The episode continues a focus on environmentalism that characterized the end of the Jon Pertwee era.

Dinosaurs have been appearing in London while the Doctor was away. An element connected with religion – as usual, depicting it as a superstitious and primitive response to something that has a scientific explanation – is introduced as an individual from the time when King Richard is in the Holy Land appears in the present day, only to suggest that a witch had cast a spell on him and that he will arrange for a priest to have her burned.

The arrival of dinosaurs is a distraction, aimed at clearing central London with the aim of implementing “Operation Golden Age,” which wants to use time manipulation not to travel, but to revert the world to its state before humanity had ruined it with pollution and other such things.

Meanwhile, a select group of people – artists, writers, etc. – have been selected to travel to “New Earth” which they have been told is like Earth was at an earlier stage of development. In fact, they are being misled, in order to “arrive” on the Earth itself after it has been reverted to its earlier state.

The presence of this movement in the episode nicely raises moral issues. Sarah Jane, when she discovers that a particular minister is involved in the conspiracy, is sent to the “spaceship” (which is simply part of an underground bunker – wouldn’t people have noticed this when they left the bunker, if not sooner?!) There she is felt to be a disturbing influence, and so these people who think they have left the Earth because of war and other evils discuss whether it would be best to kill her (their discussion, while she is in the “Reminder Room” watching a video about the corruptions of humanity that led to their ‘departure,’ makes for a particularly poignant contrast). And likewise the effort to make most of humanity never have existed is another example of the ends being felt to justify the means. Ultimately, Sarah shows them that they are not really on a spacecraft, and the would-be space travelers object to the plan to make the rest of humanity never have existed. Captain Yates is involved in the plot, although he regularly insists that “we must not descend to such methods.” And in the end, Mark says “the ends can never justify the means.”

The Doctor’s perspective as a time traveler is an important one. He says that there never was a “golden age” but that “it’s an illusion” and that we need to make the most of the world we’ve got. Much evidence supports the view that those who reminisce about “the good old days” are being very selective in what they focus on and what they conveniently forget.  Greed is said to be the real cause of pollution.

There is also an interesting treatment of free will. Humans are said to have been given a choice, and to have chosen permissiveness, usury, and so on. And so the view of the would-be interplanetary colonists is that free will is fine, as long as one makes the right choices. And this gets at a major topic that is ignored or dealt with inadequately in many religious systems of thought. Depicting God as giving humans free will only to complain about its use and then take it away again seems rather problematic.

Invasion of the Dinosaurs (1) by greendude33 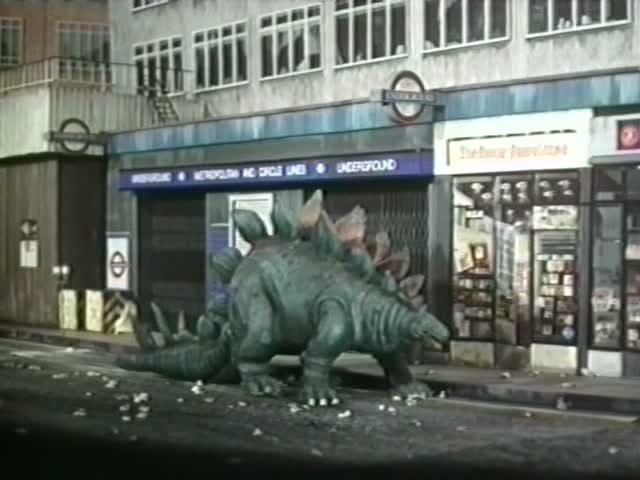