Jesus Didn’t Think He Was God

I mentioned a few posts about Bart Ehrman’s recent book yesterday, and there are already a couple more. Larry Hurtado offered some amendments to his post, in light of feedback from Bart Ehrman himself. And Ken Schenck blogged about chapter 3 and whether Jesus thought he was God. In it he writes:

I think we can safely assume that, in his public persona, Jesus did not go around telling everyone he was the Messiah, let alone God.

But one must then ask whether these is a good reason to regard the process that follows, in which Jesus comes to be viewed as the second person of the Trinity, is a legitimate or necessary one.

Schenck also criticizes Ehrman for giving voice to older formulations of scholarly views, as though things had not moved on.

The only people who think that Jesus was viewed as a divine figure from the beginning are some very conservative Christians on the one hand , and mythicists on the other. That in itself is telling.

I’d be very interested to see further exploration of the idea that, in talking about the “son of man,” Jesus was alluding to a future figure other than himself, and that it was only his followers who merged the two, coming up with the notion of a “return” of Jesus. It is a viewpoint that was proposed and then set aside decades ago, and I don’t personally feel like either case has been explored to the fullest extent possible. Scholarship on the Parables of Enoch has shifted since those earlier discussions occurred, and the possibility that that work could have influenced Jesus can no longer be dismissed.

But either way, we are dealing with the expectations of a human being, either regarding his own future exaltation, or the arrival of another figure. We simply do not find in Paul or in our earliest Gospels a depiction of Jesus as one who thought he was God. 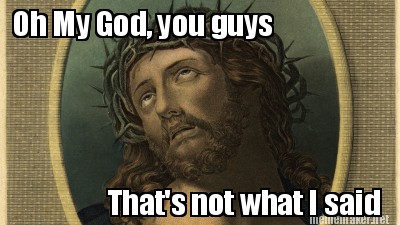