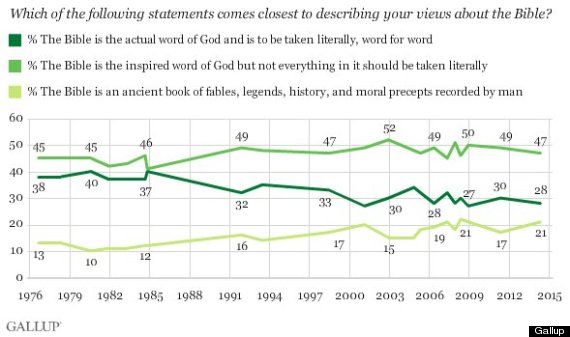 The Huffington Post recently highlighted some statistics from a Gallup poll about what Americans believe about the Bible (HT Hemant Mehta). Many progressive Christians would feel like the choices between two of the options may be a false dichotomy. Unless one ignores the names of authors sometimes actually given in the text (whether or not they are authentic is another matter), the Bible presents itself as the words of human beings. And so unless one is going to pretend the Bible is something that it is not, then one has no choice but to recognize the presence in it of human writings. But that need not necessarily rule out some involvement of God in the process, just as many Christians see all that happens as not separable from that ultimate reality we call God.

Nevertheless, whether one experiences God speaking to them through the text seems to have primarily to do with something that happens in the process of reading, and not something that can be said with any certainty to happen on the front end. And some are determined to insist not only that God was involved in the production of these texts, but that God was involved in a way that ultimately nullifies their character as human books – and thus this denies that these books are what all the evidence clearly shows them at the very least to be, whatever more some might also wish to say about them.

I have said it before, and said it again recently in a conversation on Facebook. If you have made up your mind in advance that God would provide an inerrant textbook for human beings, then if the Bible doesn't fit those assumptions, instead of crowbarring the Bible into the framework of the assumptions, leave it alone and look elsewhere for a text that meets your criteria. Here is how I put it in the conversation I mentioned:

You are assuming that God wants things clear, even though things are not clear. And you are assuming that God wants us to trust those that you assume to be God's witnesses, even though a more natural understanding of what they wrote is that they are human authors with all the fallibilities and other elements that entails. You are making all kinds of assumptions and then trying to crowbar the Bible into your preconceived stance. Why not leave the Bible as it is and find – or if necessary, write – some other text that actually looks like what you think a divine revelation should look like? Or better yet, why not take the hint that God may not want human beings to have all the answers handed to them on a silver platter – that perhaps reasoning, drawing conclusions, taking responsibility, and remaining humble because we do not have inerrant prepositions at our disposal, might be precisely what God knows is best for us?

Like most progressive Christians, I hesitate to depict God in such human terms, and would normally refrain from insisting that the way things are reflects a providential arrangement for the best. But while some have grown up as progressive Christians, I arrived here by way of a period spent in conservative Evangelicalism. I hope that this poises me well to be a cross-cultural evangelist for progressive Christianity, one who can communicate effectively with the more conservative, and help them take the next step towards a more mature, honest, and better informed view of the Bible, by interacting with them in terms that they can understand and relate to.