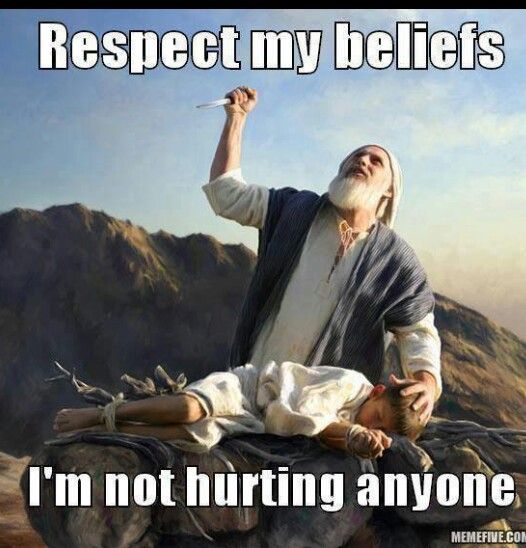 I came across this image on Pinterest, on the same day that the Pope excommunicated the entire Mafia from the Roman Catholic Church. Religion can be a powerful force to do harm or to combat those who do harm. And the line between the two sorts of religion is not one that lies between different religions or different sacred texts, but rather one that cuts through each and every one of them.

I was talking just the other day with local rabbi Sandy Sasso about the story of the binding of Isaac in Genesis 22. Sandy has been running a seminar that brings together local artists to explore the story in music, sculpture, painting, and in other media. The approach is one that has been embraced much more fully in Jewish tradition than it has by Christians – one that sees the text as an opportunity for conversation and as something to wrestle with, not something to be embraced as a definitive answer.

Paul made Abraham a type of faith. James made Abraham a type of works. In our time, we can see the character of Abraham as, on the one hand, an attempt by an ancient author to combat the practice of child sacrifice, but on the other, nonetheless an example of fanaticism, someone whose seemingly unquestioning act probably led to the death of his wife and the estrangement of his son.

Abraham is not an example to be followed unquestioningly, any more than someone who thinks they have heard a voice from God ought to follow it unquestioningly.

Not all beliefs can be respected in a society that has chosen to safeguard life and freedom. And not all beliefs should be respected, and that includes when those beliefs happen to have a connection with the Bible.

June 22, 2014 From Doctor Who to Star Wars
Recent Comments
16 Comments | Leave a Comment
Browse Our Archives
Follow Us!