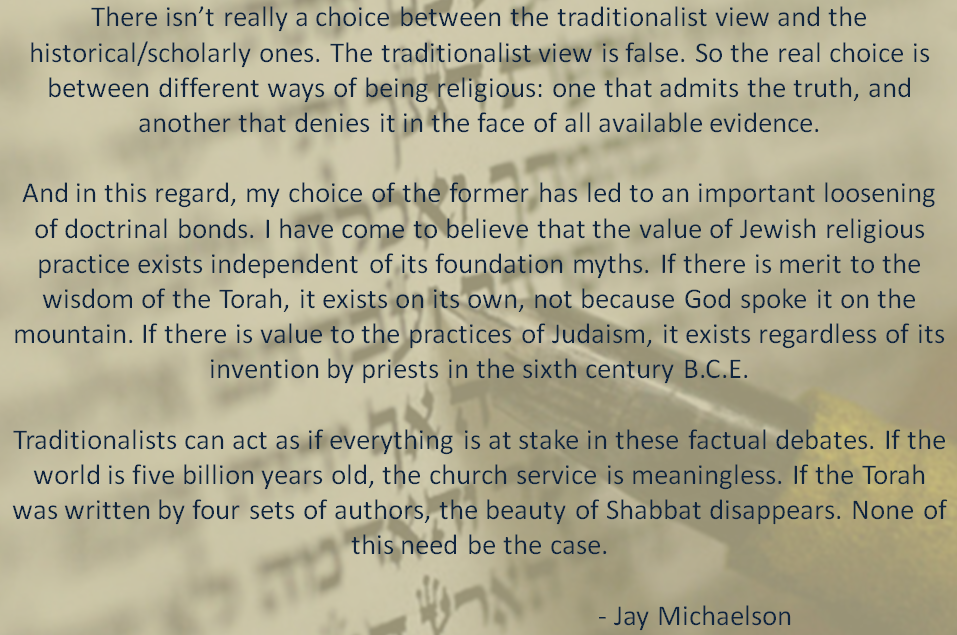 The quote comes from Jay Michaelson's recent article in Forward, “How We Know The Bible Was Written By Human(s) Hand.”

But the point is that there isn’t really a choice between the traditionalist view and the historical/scholarly ones. The traditionalist view is false. So the real choice is between different ways of being religious: one that admits the truth, and another that denies it in the face of all available evidence.

And in this regard, my choice of the former has led to an important loosening of doctrinal bonds. I have come to believe that the value of Jewish religious practice exists independent of its foundation myths. If there is merit to the wisdom of the Torah, it exists on its own, not because God spoke it on the mountain. If there is value to the practices of Judaism, it exists regardless of its invention by priests in the sixth century B.C.E.

Traditionalists can act as if everything is at stake in these factual debates. If the world is five billion years old, the church service is meaningless. If the Torah was written by four sets of authors, the beauty of Shabbat disappears. None of this need be the case.

June 23, 2014 Skeptics of a Feather
Recent Comments
4 Comments | Leave a Comment
"The audience certainly seemed to confirm the former for the most part. Some seemed to ..."
James F. McGrath Enoch Seminar 2020 #OriginsOfEvil2020 Day 4
"I hope to have something short appear in the not too distant future on the ..."
James F. McGrath Teaching about John the Baptist
"Yes!That was easy.But, all states already ban at least third trimester abortions except for maternal ..."
Sandy Plage Calling Trump an Antichrist
"Of course it is just a micro synopsis, but I wonder about the merits of ..."
Mark Enoch Seminar 2020 #OriginsOfEvil2020 Day 4
Browse Our Archives
Follow Us!