This past Sunday in my Sunday school class, we dived back into the Letter of James after a long break.

We didn’t get far.

We were up to James 1:17, and I decided not to let the cosmological and theological assumptions behind the notion of good gifts coming down from above, and God as the “Father of lights,” pass by without comment.

For most ancient people, the lights in the sky were the hosts of heaven, celestial beings which were far above us but near enough to see. Placing God above them, unchanging, was often coupled with the view that matters in our realm are overseen directly by celestial subordinates.

Talking about God as “up there” situates God much further away, if one’s view of how far one can go in that direction is informed by the Hubble telescope.

James Adamson renders the entire phrase in James 1:17 in the following interesting way: “the Father of lights, whose nature suffers neither the variation of orbit nor any shadowing out (as in eclipse)” (The Epistle of James, p.97).

We also found ourselves talking about the reference to God’s unchanging character, and the contrast with other texts which depict God as repenting. While some might approach the discrepancy by trying to make one set of assertions fit with the other, it makes more sense

The notion of “hosts of heaven” reflects the idea that the skies above us are populated by luminous beings, who regularly come among us. It is no surprise that science fiction and the mythology of UFOs often intersect with the themes and stories of ancient mythology.

And so, in concluding, let me share this cartoon which illustrates what the notion of a celestial hierarchy might look like, transplanted into our present scientific era: 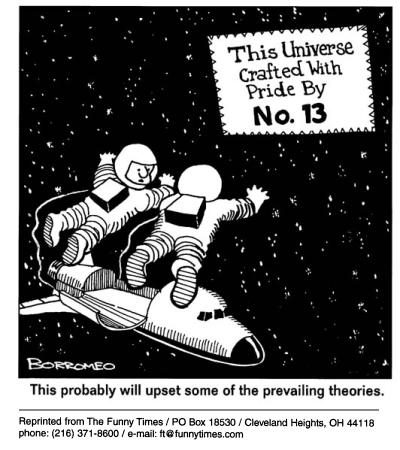 August 21, 2014
The Outsider's Test and the Golden Rule
Next Post

August 21, 2014 Gods, Machines, and Blogs
Recent Comments
0 | Leave a Comment
Browse Our Archives
get the latest from
Religion Prof: The Blog of James F. McGrath
Sign up for our newsletter
POPULAR AT PATHEOS Progressive Christian
1