I am delighted to have been given the opportunity to participate in the Patheos book club about Jerry Sumney’s interactive textbook, The Bible: An Introduction

While focused on the academic matters one would expect, such as situating the text in its ancient context, and clarifying scholarly perspectives on matters ranging from its sources to its meaning, Sumney does not ignore the theological and ecclesiastical concerns that many of his readers have. And so he writes about the creation stories in Genesis, for instance, “To say that Genesis does not give a scientific account of creation does not lessen its value or importance. It just recognizes the text for what it is, rather than trying to make it something else by imposing expectations that its author did not intend to fulfill. This reading honors the text rather than diminishing its value” (p.57).

You may have noticed that I was able to cite a page number there. In addition to the ability to highlight, add notes, and do other things electronically, the book still retains many features that some electronic sources lack – such as clear page numbering.

Here is another example of the sort of application commentary Sumney provides (p.61):

We work to over-come the conditions this curse describes in many ways. Farmers use pesticides, fertilizers, and new strains of plants to make farming easier. They even ride in air-conditioned tractors, so they do not have work “by the sweat of [their] brow.” Other people work in air-conditioned buildings because we do not think sweating at work is a good thing. When we make such efforts at making life easier, and so surmount the difficulties of life that the curse acknowledges, we are trying to make the world a little more like that “very good” place Genesis says God intended. Yet, while trying to escape the effects of the curse in some ways, in other ways many have said that the curse reflects God’s will. Less than a hundred years ago, some people argued that women should not receive anesthetics when giving birth because God said they should suffer in childbirth. Of course, those who made that argument were later in favor of tractors and air-conditioning!

If believers recognize that this curse does not reflect God’s will for life (as they do when they make work less difficult), then it cannot serve as the basis for how they organize their families. When the author of this section of Genesis looked at the subjection of women to their husbands, he saw it as part of what had gone wrong with the world. This curse is not a pattern for how to structure the world or families (as our use of tractors and air-conditioning recognizes), it is a description of the way things are when people violate God’s will. So unless believers are ready to reject all the things that make the work of their livelihoods easier, they cannot use this passage to assert that wives should be submissive to husbands. Remember, this family structure is part of what Genesis says is wrong with the world.

As I consider whether Sumney’s book will work well for me teaching at Butler, I will be trying to assess whether such discussions of application will be meaningful to the wide range of different students in my class. But whatever I decide about that, it should be clear that for certain categories of readers, Sumney’s approach will distinguish his book from many other introductions to the Bible, which discuss scholarly historical and literary questions while ignoring many of the questions about application that readers today may have.

The book is fully interactive in more than the typical internet sense of allowing one to not merely see images but zoom in on them, or click a hyperlink and be taken to more information. There are sections which allow you to test your knowledge, for instance by arranging events by dragging them into their chronological order.

One of my favorite quotes from the book is from p.387 in the epilogue:

Many readers who approach the Bible from a stance of faith assume that it does the Bible the most honor to read it in a very literalistic fashion. But this assumption adopts a notion that is not in the Bible itself. Indeed, the varying kinds of literature in the Bible demonstrate that this approach to the Bible has serious problems.

I am delighted to see academic authors beginning to do more than simply take content designed for print and make it electronic. Sumney’s book makes better use of the unique capabilities of the ebook format. I will be giving it serious consideration for adoption for my classes.

Have you used an electronic textbook, whether Sumney’s or another, either as a professor or as a student? What was your experience, and how was it different from your experience with a traditional printed textbook?

Also, don’t miss that Sumney is appearing this month on Patheos in a series called “stump a Bible scholar”! 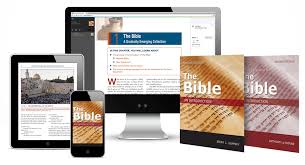 Progressive Christian
"I feel like I will read the Gospels...
Religion Prof: The Blog of James F. McGrath