I love teaching the first year seminar class “Faith, Doubt, and Reason.” Reading Clifford and Tillich, the Bible and Hume, all in one semester makes for great conversations.

In Monday’s class we talked about the meaning of faith. Clifford famously discussed the moral implications of accepting claims on insufficient evidence.

When Tillich was brought into the picture, it helped highlight something: what passes for “faith” in our time is often an unwavering insistence that one is right, or in other words, a feeling of certainty about a matter concerning which the evidence you have considered does not justify that certainty.

I’d like to suggest that the above, although sometimes described as “faith,” is actually doubt.

Insisting you are right without looking at the evidence or being willing to do so suggests that you are afraid that a close examination of what you believe might cause the entire edifice of you belief system to come crashing down.

How is that “faith” in any sense of the word? Isn’t it better described as “doubt”?

And if so, then what does it say about us if we have sometimes mistaken doubt for faith?

Of related interest, see the discussion of Al Mohler and inerrancy on the blog Unfundamentalist Christians. Here’s a sample:

For a fundamentalist, it doesn’t matter if you’re an archaeologist or a scientist or an expert of any sort. Higher education, specialized knowledge and careful study of our world — a world created by God — are completely irrelevant when it comes to Scripture: the Bible said it, we must believe it, that settles it.

Ultimately, what I find so troubling about Mohler’s position regarding inerrancy is not the belief itself, but rather the absolutism with which he maintains it. When one eschews doxastic responsibility in favor of unassailable fideism, truth no longer matters. We might as well proclaim “What is truth?” wash our hands of responsibility, and put to death the minds God has given us. 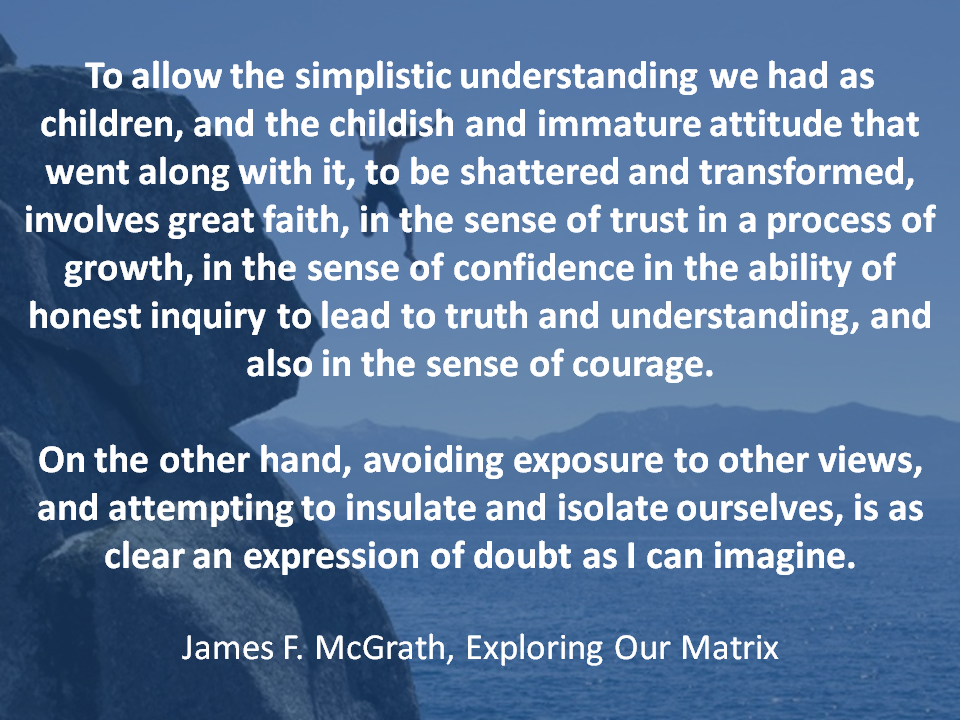 September 10, 2014 Natko Devčić - Ballade for piano and orchestra
Recent Comments
2 Comments | Leave a Comment
Browse Our Archives
get the latest from
Religion Prof: The Blog of James F. McGrath
Sign up for our newsletter
POPULAR AT PATHEOS Progressive Christian
1