Creationism says: universities are so much under the grip of atheism that creationism cannot get a fair hearing.

Mythicism says: universities are so much under the grip of Christianity that mythicism cannot get a fair hearing.

Aren’t these two claims like antimatter? When they collide, don’t they cancel one another out in a spectacular release of energy (presumably in the form of arguments and counterarguments, which presumably may likewise explode in an ongoing chain reaction?) 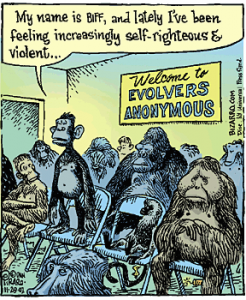 September 8, 2014 Supernatural Syriac
Recent Comments
41 Comments | Leave a Comment
"Use Bayes’ Theorem to demonstrate that the use of Bayes’ Theorem in the study of ..."
James F. McGrath Review of Richard C. Carrier, Proving ..."
"Interesting review yet, quite flat and openly hypocritical. If one is going to critique a ..."
Jason Review of Richard C. Carrier, Proving ..."
"You have already been told that simply sharing a link with no comment relating it ..."
James F. McGrath Same-Sex Attraction, Mediterranean Culture, and Scripture
"Link: What does the Qur'an say about homosexuality? And what about the Bible?"
Amin - Same-Sex Attraction, Mediterranean Culture, and Scripture
Browse Our Archives
get the latest from
Religion Prof: The Blog of James F. McGrath
Sign up for our newsletter
Books by This Author Books by James F. McGrath