Paul Penley, in a guest post on Jesus Creed, discussed whether personal Bible reading has had an overall positive or negative impact on the church. Even those of us who are heirs to Luther’s convictions about individuals taking responsibility for their own beliefs and following the dictates of their own consciences, we can feel the force of Johann Eck’s response to him at the Diet of Worms: “Martin, there is not one heresy which has torn apart the bosom of the church, which has not derived its origin from some interpretation of Scripture. The Bible itself is the arsenal whence each innovator has drawn his deceptive arguments.”

The sheer number of denominations which have resulted shows that providing people with the Bible in their own language doesn’t get us closer to a single, unified truth, but makes us more divided, as this chart suggests: 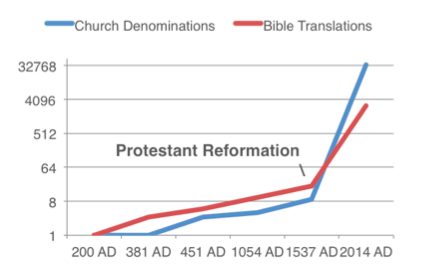 Islam makes people dependent on those who know Arabic, and even those who know the language can disagree on the meaning of the Qur’an. Protestant Christianity (at least in its popular form) gives people the illusion that they can simply read the text and draw their own conclusions without having to worry about other languages, ancient cultures, or any other such considerations.

I prefer the freedom Luther stood for to the authoritarian alternative. But I think there are alternatives besides the two extremes. One can imagine a middle ground in which people have the freedom to read the Bible for themselves in translation, but are aware that even in doing so they are dependent on experts in language, history, and other fields, leading those readers to exercise humility and eschew dogmatism regarding their own conclusions.

I’m not saying that’s realistic. But it is desirable.

Of related interest, a rare photo of Martin Luther from the Diet of Worms has come to light recently: 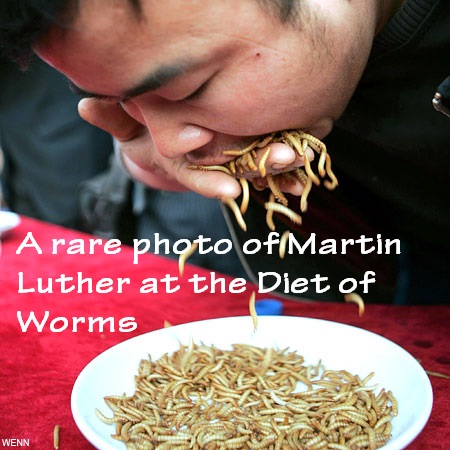 September 17, 2014 Jerusalem: The IMAX Movie
Recent Comments
31 Comments | Leave a Comment
"Thank you, Dr. McGrath, I appreciate your opinion and support. I believe in treating people ..."
gloriamarie Q Coup Take 2?
"I am referring to the judgement of historians and other scholars of ancient literature, all ..."
James F. McGrath Tampering with the Words of the ..."
"Because you replied so graciously to a malicious internet commenter I will leave their comment ..."
James F. McGrath Q Coup Take 2?
"I meant "tripling." Thank you for point out my typo. I have a Benign Essential ..."
gloriamarie Q Coup Take 2?
Browse Our Archives
get the latest from
Religion Prof: The Blog of James F. McGrath
Sign up for our newsletter
POPULAR AT PATHEOS Progressive Christian
1