Not How Biblical History Worked 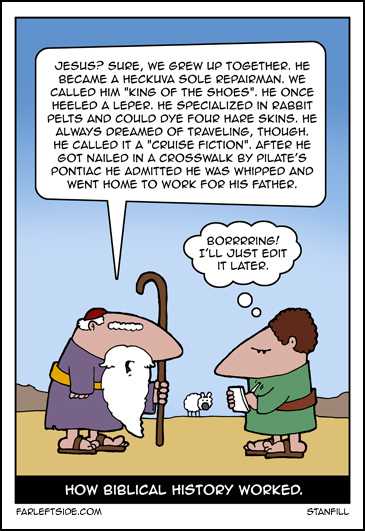 This cartoon came to my attention via Jerry Coyne’s blog. It seems to me to reflect one of the things that modern atheist critics of ancient religious texts imagine to be possible, but few others do, namely that the Bible’s authors took the truth, which was boring, and turned it into something so different as to be interesting but wholly unlike what actually happened.

In most instances, where we know the origins of a religious tradition, we find at its core (1) a charismatic individual, (2) teachings which are found to be helpful for living, and (3) hope for salvation from the traumas of life in an agrarian, pre-modern world with none of the medical or agricultural advances that we take for granted.

One can find the attempt to deal with a crucified messiah by attributing his death a salvific meaning to be more problematic than accepting the crushing of one’s expectations. But seriously imagining that someone simply invented it out of nowhere and people believed it, or that someone turned “dyed four hare skins” into “died for our sins,” makes you at least as gullible as those ancient religionists you despise.

September 9, 2014
The Whore of Babylon is So Misunderstood
Next Post

September 9, 2014 The Historical Consensus About Jesus
Recent Comments
8 Comments | Leave a Comment
"I have always seen a connection between 'biblical literalism' in religion and 'strict constructionism' in ..."
Daniel Liechty Literalists aren’t Literally Literalists
"Instead of examining every tweet and word out of Trump’s mouth, you need to look ..."
Dennis Trump’s Blasphemies
"Do you agree with James when he said below:"Let me add, however, that just because ..."
John MacDonald The Aims and Ending of Luke-Acts
"That isn't what I said. I said that, unless you are going to attribute dementia ..."
James F. McGrath Trump’s Blasphemies
Browse Our Archives
get the latest from
Religion Prof: The Blog of James F. McGrath
Sign up for our newsletter
POPULAR AT PATHEOS Progressive Christian
1